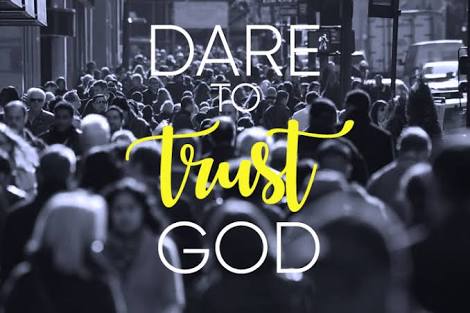 DARE TO TRUST HIM AGAIN!

It is the season of Lent again when Christians all over the world will be observing forty days of fasting, praying and basically re-dedicating themselves to God.  It is a period most refer to as a time of sober reflection. Most churches have a calender already scheduled for this period where corporate prayers will be said by worshippers who will gather together on set days and times focusing their prayers on a number of general issues. Also a lot of people use it as an opportunity for personal revival where they seek the face of God concerning issues that have troubled them or where they seek to restore a broken or non existent prayer altar. That is not to say that they could not have done this privately aside from the Lenten season. But I guess there is just something about the corporate anointing,  knowing that a host of other people are spending time praying and fasting is a source of encouragement.

So here we are again at that threshold of Lent; What are you giving up? Remember this is not a hunger strike. So it is more than giving up just food for a set number of hours a day. We must put the word of God on the menu too and serve it fresh and hot daily.  Then finally what are you asking God to do for you at a time like this? What are you putting your trust in Him for again? Perhaps you have been trusting Him for something for years and you have even decided to strike this particular  prayer request off your list as you have given up totally; well how about I ask you to please reconsider your position?  Do not give up just yet. I know it’s been like forever; you have waited too long and nothing seems to be happening in your favour. Still hang in there again because; “It was by faith that even Sarah was able to have a child though she was barren and was too old. She believed that God would keep his promise.” Hebrews 11 : 11 KJV  The mere fact that that you have put it on your prayer list again is an act of faith and I know God will honour it.

This is what Jesus said about the widow who kept going to ask the “unjust” judge to avenge her. The judge eventually avenged her for fear that she would wear him out with her persistence if he did not. Her persistence is referred to as faith. “Even he rendered a just decision in the end. So don’t you think God will surely give justice to his chosen people who cry out to him day and night? Will he keep putting them off?  I tell you, he will grant justice to them quickly! But when the Son of Man returns, how many will he find on the earth who have faith?” Luke 18: 7-8 NLT

Listen to what God says “The Lord of hosts hath sworn, saying, Surely as I have thought, so shall it come to pass; and as I have purposed, so shall it stand:” Isaiah 14-25 KJV Think back; God must have said a word concerning you. Do not let it slide. Hold fast unto it. And remind Him of what He said. “For I know the plans and thoughts that I have for you,’ says theLord, ‘plans for peace and well-being and not for disaster, to give you a future and a hope.” Jeremiah 29 : 11 (AMP) Do not just sit back and explain unpleasant situations in your life away. They are not meant to be. Gods plan for us are good and pleasant. Rather pray and fast them away. Are you still in doubt maybe? God further affirms His commitment to you. Hear this : “For the Lord of hosts has decided and planned, and who can annul it? His hand is stretched out, and who can turn it back?” Isaiah 14 – 27 AMP. It is as simple as that. Nobody can annul or cancel God’s plans for us. Maybe a delay or a postponement can occur. But NEVER let that stop you.

It is time to seek Him again concerning that matter that is weighing you down.  It is time to trust Him all over again. Hold Him to His promises. He has integrity.  He will make it good.