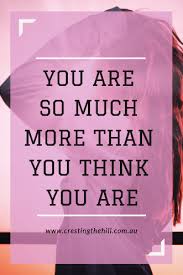 YOU ARE SO MUCH MORE!

I am currently reading a book titled “Treasure in Jars of Clay” by Claudio Freidzon. The title has inspired this article. Has anyone ever made you feel small. Have you ever felt  that you were not good enough for something or someone?  Do you sometimes feel that you are never going to amount to anything? Do you feel like you are stuck in a place where it looks like there will never be a way out? Then you must read this.

Let me tell you about David the shepherd boy turned king. His father, who should have been speaking greatness into his life totally disregarded him . Hear what he said when asked about all his son: “Then Samuel asked, “Are these all the sons you have?”“There is still the youngest,” Jesse replied. “But he’s out in the fields watching the sheep and goats.”” 1 Samuel 16: 11a  Like seriously! For such an important program that should have involved the whole household, Jesse did not think one of his sons should be present! He was out with the goats! His brothers also had a condescending attitude towards him. “But when David’s oldest brother, Eliab, heard David talking to the men, he was angry. “What are you doing around here anyway?” he demanded. “What about those few sheep you’re supposed to be taking care of? I know about your pride and deceit. You just want to see the battle!”” 1 Samuel 17 : 28 NLT They did not want David around them. They were avoiding him like a plague! But that was their own  opinion. Yet God saw very differently.  God saw royalty,  God saw a mighty man of valour, God saw a warrior, God saw a worshipper. Therefore it did not matter what anyone else saw, believed or said about David. God saw a great king and that settled it.

There was also Joseph the son of Jacob. He had dreams and visions of being very great. And at least his own father loved him and favoured him. But that angered his siblings so much. His brothers thought he was proud when he told them his dreams.  And that just made them gang up against him and devise a plot to kill him. The plot however was foiled by one of his half brothers but they succeeded in selling him off as a slave. They thought they had gotten rid of him and his dreams forever. But little did they know that they were actually aiding the fulfilment of them. God had already prepared a place for him even though he got there as a slave.

Naomi was left bereft when her husband and two sons died in a foreign land. Both her sons had been married to women from the foreign land and she urged them to stay back while she returned home to her people. The one Orpah stayed back with her people while the other Ruth went with Naomi. Exactly what hope was there for Ruth? She and her mother in-law were near destitute. In fact Naomi had lost all hope. Hear what she said:  “Don’t call me Naomi,” she responded. “Instead, call me Mara, for the Almighty has made life very bitter for me. I went away full, but the Lord has brought me home empty. Why call me Naomi when the Lord has caused me to suffer and the Almighty has sent such tragedy upon me?” Ruth 1:21-22 NLT

As for Ruth, a woman in a strange land who had travelled down because of the love she had for her late husband and her mother in law, she was no better than the servant girls that worked in the fields of one her late husbands relatives. But God had other plans for both of them. While Naomi had her youth restored and became an “emeritus” mother, Ruth became the great grand mother of David the king. How cool is that?

Every single one of us is a treasure. The container might look rough and tacky right now but trust me there is so much more beneath the surface. They disregarded David,  Joseph was hated so badly by those who were to be his keepers (his siblings were not their brother’s keepers) and Naomi and Ruth had no hope for a better tomorrow. Could this be you right now? Whatever they say does not matter; whatever they do does not matter whatever you are facing now does not matter. In there, there is something of great value; something precious and it is up to our Heavenly Father to make all things work out for our good. Because “We are like clay jars in which this treasure is stored. The real power comes from God and not from us.”  2 Corinthians 4:7  Contemporary English Version