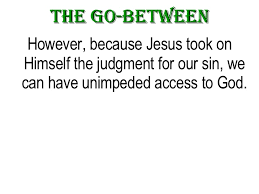 I went to secondary school in Western Nigeria in the late 1970’s and in the early 1980’s long before electronic mails and mobile phones became popular. Most correspondence then was done by post or was hand delivered through someone who was likely to see the addressee. The go-between who was responsible for delivering the mail was also referred to as the “intermediary.” So most of the time to contact our classmates over the long holidays we would write them letters in care of their parents. If for any reason the name of their parents (or the go-between) was wrongly spelt or somehow mixed up, the mail would be returned to its sender. It was therefore of utmost importance to write out the name of the addressee, that of the go-between and their address very clearly so as not to suffer a “return to sender” consequence.

In the old testament, the people could not go directly to God.(Except for a few people like Abraham and Moses; whom God appeared to personally) They always had to go through a middle man, an intermediary – the high priest. And even then, the high priest had to observe some protocol and certain ritual cleansing by using the blood of bulls and goats before going into the Holy of Holies where the ark of the covenant was kept. The holy of holies represented the meeting place between man and God and was hidden behind a veil and no one was allowed to go before it carelessly.  A young man, Uzzah, who innocently tried to protect the ark from falling to the ground, by reaching out his hand to steady it, was instantly struck dead.  That is how hallowed and revered the the ark of the covenant and the Holy of Holies were. You could not touch or go in without first being cleansed. “And the anger of the LORD was kindled against Uzzah, and God struck him down there because of his error, and he died there beside the ark of God.”  2 Samuel 6:7 English Standard Version

Thank God that we no longer have to go through the sacrificing  and the sprinkling of blood of animals to appear before God. The only thing needed is the blood of Jesus and it has been shed once and for all time. On Calvary when Jesus cried, “It is finished,” The veil of the temple ripped in two from top to bottom.  We now have direct access to God. He is no longer hidden behind a veil. Today, Jesus Christ, our Lord and Saviour is the only  intermediary between us and God the Father. He is our go-between, our advocate.  “Jesus told him, “I am the way, and the truth, and the life. No one can come to the Father except through Me.” John 14:6 NLT Simply put, there is no other way to God. Jesus is the only way. So if we want to reach out to God let us remember to go through Jesus so that we do not have to be told : return to sender. “For, There is one God and one Mediator  who can reconcile God and humanity –  the man Christ Jesus”.  1 Timothy 2:5 NLT So we do not need to visit or patronise anyone else who is promising us that they have a special way to talk to God or to hear from Him. There is no other way that is valid. Anything that is not Jesus, is null and void.

This brings to memory the very popular hymn “TO GOD BE THE GLORY, GREAT THING HE HAS DONE”

The last two lines of the refrain say it very aptly.

“Oh, come to the Father, through Jesus the Son,

And give Him the glory; great things He has done.”

In the course of any transaction,  middle men make it costlier without necessarily giving one the best deal. What God has done is indeed very great. We no longer have to buy bulls, rams, goats, chickens or any such things to give to anyone who claims it is the way to know or hear God’s will. God Himself urges us to come to Him “boldly”. “So let us come boldly to the throne of our gracious God. There we will receieve his mercy, and we will find grace to help us when we need it most.” Hebrews 4: 16 NLT

We get a much better bargain by going to God through the most authentic way; Jesus.  Nobody will short change us.

The only way is to go to God is through JESUS.

HE IS THE GO-BETWEEN.