YES! GOD HAS ALLOWED IT 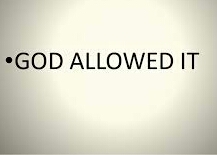 YES! GOD HAS ALLOWED IT.

There was once a favoured son who was distinguished by a coat of many colours. He knew he was loved more than his brothers and that his future was very bright  but why was he sitting in prison after first being sold into slavery by his own blood brothers and then being implicated by the wife of his master. Perhaps the dreams he had of being great were nothing more than mere hallucinations. This was the story of Joseph the son of Jacob.

The story of Job is known to most of us. He was a healthy, wealthy man, who had sons and daughters and to crown it all was found righteous in the sight of God. Wasn’t that just perfect! Or so it appeared.  And then in a one fell swoop, his life changed forever when one servant after another came bearing bad news of how he had lost everything including all his children. And as if that was not enough, he became sick. Yet this was a man that even God considered to be good. So why did all this “evil” befall him?

Remember also the sisters Mary and Martha who had a brother called Lazarus. They were very good friends of Jesus. Jesus loved them and the feeling was mutual. Then Lazarus fell ill and his sisters sent for Jesus and expected Him to come to them immediately. But Jesus took His time and Lazarus had died and been buried before He got to them. It was such a pathetic situation that moved Jesus to tears when He got to the tomb of Lazarus. That was a show of how much love He felt for the family. So why let Lazarus die?

The three stories above all have something in common. Seemingly devastating things befell them. But there is something else. God allowed these things to happen. God could have stopped them from happening but He allowed them for reasons not known to the ones who passed through the trials.

It was while Joseph was in prison that he met the king’s Butler who later introduced him to the king to interpret his dreams. Subsequently, Joseph went on to become the Prime Minister of Egypt. And God used him to save his people during a famine. “Then he had Joseph ride in the chariot reserved for his second-in-command. And wherever Joseph went, the command was shouted, “Kneel down!” So Pharaoh put Joseph in charge of all Egypt.” Genesis  41:43 NLT

God had described Job as an upright man but He allowed Satan to meddle in his life. The devil struck Job so badly and took away all his physical blessings as well as his children. I honestly cannot say why God allowed the extent of Job’s suffering but today Job is a role model to all who are in one form of tribulation or other; God will see them through. .“We give great honor to those who endure under suffering. For instance, you know about Job, a man of great endurance. You can see how the Lord was kind to him at the end, for the Lord is full of tenderness and mercy.” James 5:11 NLT  At the end the Lord restored to Job all that he had lost. “When Job prayed for his friends, the Lord restored his fortunes. In fact, the Lord gave him twice as much as before!” Job 42:10 NLT

The death of Lazarus really hurt Jesus. Yet When Jesus first heard about  his sickness he said, “….. “Lazarus’s sickness will not end in death. No, it happened for the glory of God so that the Son of God will receive glory from this.” John  11:4 NLT God was glorified at the resurrection of Lazarus. And many believed.

It appears that when things are not going as we planned or as expected, God is at work behind the scenes.  While the COVID 19 persists, trust me, God is up to something and it will be for His glory. But I believe that there is also a lesson for each and everyone of us at this time and it would do us good to ask what He wants to teach us individually or collectively. A lot of lives have already been lost to the pandemic but we are spared and it’s not because of anything that we have done. However we look at it: COVID-19 has been allowed by God for a reason.

This is therefore not the time to spread fear and panic. But the time to ask God what He would have us do. And as we approach this Good Friday and Easter Sunday, let us cling to “The Old Rugged Cross” know without any doubt that THE CROSS WILL PREVAIL.

HAVE A HAPPY EASTER.