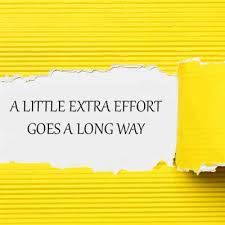 A few days ago, I was cleaning a wash hand basin in my home. I had noticed a particular “stubborn” black dot a while back and any time I scrubbed, it never faded away. I just thought “what is wrong with this thing?” And before I knew it, I started scrubbing furiously at it. To my pleasant surprise,  after a brief moment, said black dot vanished. I gaped and thought wow! Thank God I applied some pressure. And like most things that happen to me or around me,  I  immediately picked up a message.

I do not know about you but there have been times that I gave up too quickly and later realised that just a little extra push would have made a difference.  Are there things you should have put a little extra effort into before you gave up on them? Should you perhaps have worked harder at that marriage, that business, that Masters programme, that job, that educational qualification, that degree,  that relationship or that child before giving up on them?

There is an English proverb that says “It’s the last straw that breaks the camel’s back.”. It is not actually that single straw that does the final damage but rather the cumulative effect of all the other straws put together. When we are in situations that are not going well, most of us try hard to make things turn around for the better. But there are times it appears that our efforts are futile and we see no changes. Could it be perhaps that our efforts are being accumulated so that one final push will break us through or open the door?

What is that “last straw” that will “break the back” of that problem? Or the little extra effort we still have to make to see things change in our lives? Hear what Jesus said:  “And he said unto them, This kind can come forth by nothing, but by prayer and fasting.”   Mark  9:29 KJV Prior to this, his disciples were unable to cast out the demon that had taken over a certain child. Until Jesus came and delivered the child. Remember, Jesus had a habit of going off by Himself to pray.

There is also the story of Moses who would have eventually suffered from exhaustion but for the counsel of Jethro, his father in law, who saw him trying to attend to every single Israelite that came to him with a problem. “This is not good!” Moses’ father-in-law exclaimed.  “You’re going to wear yourself out and the people, too. This job is too heavy a burden for you to handle all by yourself. Now listen to me and let me give you a word of advice, and may God be with you. You should continue to be the people’s representative before God, bringing their disputes to him.” Moses listened to his father – in-law’s advice and followed his suggestions.” Exodus 18:17 -19 & 24 NLT

When Naaman, the Syrian army general was told to go to Israel and see the prophet who would heal him of his leprosy, he got angry and was about to storm off when asked to go and dip himself seven times into the Jordan river. He felt insulted that the prophet did not come out personally to attend to him and that the rivers in Damascus were better than the Jordan anyway. But his servant pleaded with him to try it and Naaman did and was healed. He had to let go of his pride.

There was a certain woman with an “issue of blood” , we are told that she had been to many physicians all to no avail. But she did not give up. Then she heard of Jesus and she made that extra effort to go see him. She got healed. “And, behold, a woman, which was diseased with an issue of blood twelve years, came behind him, and touched the hem of his garment:  For she said within herself, If I may but touch his garment, I shall be whole.  But Jesus turned him about, and when he saw her, he said, Daughter, be of good comfort; thy faith hath made thee whole. And the woman was made whole from that hour. Matthew 9: 20-22 KJV  She was a woman of great faith.

Moses (though God was now using him mightily) did not shun the counsel of an in-law.  Naaman {also did not shun the counsel of a slave girl (his wife’s maid) who suggested that he go to see the prophet in Israel} eventually let go of his pride and got healed. The woman with the issue of blood held on to her faith though she had already spent all she had and her condition remained the same. She did not give up.

The little extra effort that we might need to make today could be as simple as seeking counsel and applying it; it could be letting go of pride and being humble; or it could just be a matter of holding on to our faith, praying and fasting concerning the matter at hand.

WHATEVER WE DO KNOW THAT A LITTLE EXTRA EFFORT, GOES A LONG WAY!