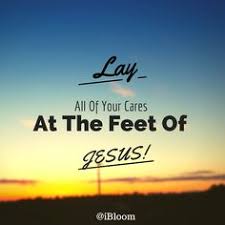 BRING IT TO THE FEET OF JESUS

The world is revolving! We learnt that the earth moves around the sun. We hear it said that “what goes around, comes around.” It is written that “For everything there is a season, a time for every activity under heaven. “ Ecclesiastes 3 : 1 NLT As a matter of fact, the above scripture is followed by eight verses detailing the different times and seasons that exist. It appears then that nothing is static. So let us suppose that the family of Mr. and Mrs. Leo is always nicely put together,  always looking good, radiant and joyful, it is not to say that they do not have issues. But maybe they are the ones who have understood the scriptures in Ecclesiastes 3 very well and know that before long whatever issues they are dealing with will soon pass. Maybe today is a time to weep but they know tomorrow will be a time to rejoice.

Wealth and riches do not exempt us from trouble; neither does a healthy frame and a great pedigree nor a good job and influential friends. Please do not get me wrong, these are all great to have. Yet a little over a year ago, we were greeted with the news of the suicides of Designer Kate Spade and Chef Anthony Bourdain, both notable and somewhat influential Americans who one might have thought “had it all”. Still something led them and possessed them to take their own lives. What could it be? I honestly do not have an answer. But what I do know is that right now some of us are  facing all kinds of challenges. Some have health challenges, a rebellious teenager, a cheating spouse, money matters, fear of how our loved ones can be safe and secure in the midst of all the uncertainty,  violence and hostility out there; it really could be anything. And I also know that suicide is definitely NOT the way out. It only creates a bigger problem for those left behind.

I have not come to tell you tales of woe but to tell you where to go when it all becomes unbearably overwhelming. Let us go to the feet of Jesus. There we will find all the help and healing that we need; be it physical, emotional, psychological,  spiritual and even financial. If we are hurting in any way, His love is there to assure us that all will be well.

“And great multitudes came unto him, having with them those that were lame, blind, dumb, maimed, and many others, and cast them down at Jesus’ feet; and he healed them:” Matthew 15: 30 KJV   Some had no vision, some had no voice, some had been abused in many different ways and were left with scars. But at the feet of Jesus healing and wholeness was restored to them.  Likewise one of the rulers of the synagogue, Jairus,  whose daughter was very sick and the woman with the issue of blood fell at the feet of Jesus and received total healing.  “And, behold, there came a man named Jairus, and he was a ruler of the synagogue: and he fell down at Jesus’ feet, and besought him that he would come into his house: For he had one only daughter, about twelve years of age, and she lay a dying. But as he went the people thronged him.”  Luke 8: 41-42 KJV   Before Jesus attended to Jairus, He was delayed by the woman with the issue of blood.  But in reverent fear, Jairus had fallen at the feet of Jesus bringing his daughter’s condition to Him. And his daughter was eventually brought back to life.  “But the woman fearing and trembling, knowing what was done in her, came and fell down before him, and told him all the truth. And he said unto her, Daughter, thy faith hath made thee whole; go in peace, and be whole of thy plague.”  Mark 5: 33-34 KJV Her faith had made her touch the hem of Jesus garment and as she fell at His feet, He assured her that she was free from all affliction.

Like the great multitudes in Matthew 15:30, as well as  Jairus and the woman with the issue of blood who came and fell at the feet of Jesus with all kinds of ailments and got healed, we can also bring whatever ails,  troubles,  afflicts or challenges us to the feet of Jesus. He has not changed, He remains the same yesterday, today and forever. Come afraid,  come trembling, come weeping, come any which way; but be sure to come. For this is what He is saying at this time;  “Then Jesus said, “Come to me, all of you who are weary and carry heavy burdens, and I will give you rest.” Matthew 11:28KJV

At the feet of Jesus come and receive strength to cope with whatever you are passing through knowing that it is just for a season. It will not last forever.