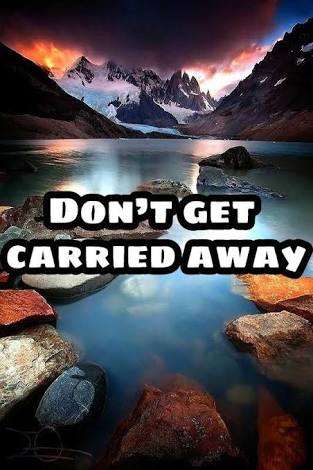 DO NOT GET CARRIED AWAY.

Marie was a brilliant young lady and throughout her stay at the University she excelled at all her courses and decided that she would work hard to be a renowned journalist in an international broadcast media company.  She graduated with flying colours and got a National Youth Service Posting (a compulsory year of service to the nation of Nigeria) to work at a media company. She was excited and it was like her dream was coming true. She was also getting ready to do a Masters degree in Investigative journalism to give her the solid background she needed to excel in the global market.

One morning on arrival at work, Marie was informed of the absence of her colleague who was the anchor of a very popular programme. Her boss asked if she could hold the fort and Marie thought “Well; it cannot be difficult, can it?” So she agreed. She went through her lines and did a quick study of what was expected of her. She got a good grip and when it was time to record the programme she was good to go. Unknown to Marie, the ratings for the programme had been dropping but she went to the studio with her charm and ever bubbly personality. She was a natural and by the end of the day some calls had come through to the company to enquire about the “new kid on the block”. After recording four episodes it seemed like nobody remembered the original anchor.  Marie was a star and she was loving all the attention.

She soon forgot her plans to go for a post graduate degree and began to enjoy her new role. When the service year ended, she was offered a permanent place on the job with a lot of perks and she promptly accepted. She became very active on Social media especially Instagram. She put up a new picture every day. And as her followers and likes increased she became so carried away by all the comments and  views on Instagram that she was virtually living for them.  Everything she did went on Instagram – her food, a new hairdo, a new pair of shoes,  gifts from admirers, very private things; she was slowly going out of control. As long as her followers were pleased, she put it up on social media. Before long, Marie had become the queen of Instagram  and  had left her dream unfulfilled. Fortunately she realised this before it was too late when a former class mate contacted her and asked how she was living her dream. This jolted her back to the reality she truly wanted. And she immediately began to make plans to register for her Post Graduate programme. Marie is not the only one who could get carried away and excited by worldly accolades and cheers. It could be anyone.

Aaron was left to supervise the Israelites who had just been delivered from Egyptian oppression while his brother Moses went up the mount Sinai to receive instructions from God, who had delivered them so they could be free to worship Him. The people became impatient and put Aaron under pressure to make a “graven image”  for them to worship instead. And before you could say “The Place of Praise”, Aaron gave in to their pressure though he knew it was not right.  Perhaps he was afraid of them or maybe even he was not sure about this “God”. Whatever it was he did not challenge their request. Seeing that the people were pleased encouraged Aaron. “Aaron saw how excited the people were, so he built an altar in front of the calf. Then he announced, “Tomorrow will be a festival to the Lord!” Exodus  32:5 NLT

As leaders, parents and Shepherds of the sheep, do we ever find ourselves under pressure to perform? Are there times we feel inadequate about what we have been charged with and we begin to formulate things to make it appear that all is well? Remember that we are just custodians. The real owner knows exactly what to do when things are not working. If after going through His manual (the Holy bible) we cannot figure it out, then let us call Him up by interceding for our charges. HE CAN FIX IT; no matter what it is. If it gets overwhelming,  let us take it to the Rock that is higher than we are. Psalms 61:2  We are human before anything else and we should never try to play God. If students are not doing well on the exam, do not help them to cheat. If church members are not having testimonies, please do not cook things up .Even when our children are clearly doing the wrong thing, we should never cover them up or encourage them regardless of how long we waited to have them.

Marie realigned herself, got back on track and went ahead to become an accomplished journalist. The Israelites who pushed Aaron were not as lucky.  Some of them were punished by death. Yet Aaron escaped the punishment. We will not all be like Marie or Aaron.

Worldly accolades are not always a measure of fulfilment.

DO NOT GET CARRIED AWAY BY THEM!!