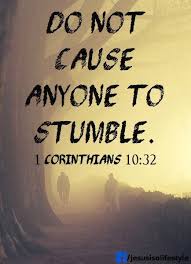 DO NOT LET THEM STUMBLE

What is it with helicopters lately?

I had planned my article around a helicopter story before the news of the helicopter crash that killed Kobe Bryant and other passengers hit the airwaves. May the souls of the departed rest in peace and I pray that their families will be comforted and know the peace of God at this trying time and always.

Sometime last week, I saw the video of a helicopter that was parked at the u-turn of a relatively busy road and it’s main rotor blade was still spinning. I was confused. This was not a helipad or a heliport. This was the main road and there were other road users driving on both sides of the road. Then suddenly a truck carrying water storage tanks, coming from the opposite direction drives in to make a u-turn where the helicopter is parked. Well your guess is as good as mine. He drives close to the spinning rotor blades which slice through his truck and send storage tanks flying all over the place.  The blades were destroyed and the helicopter could be seen tilting to one side.

Now, I have no idea what the helicopter was doing on a busy road in broad day light where traffic had not been diverted or cordoned off. What was the pilot doing? The truck driver somehow did not see the helicopter (he definitely was not expecting to see one on the road) and drove smack bang into its rotor blades. I do not know if the helicopter had to make an emergency landing or anything of the sort. But the action of parking a helicopter on the road with its rotor still spinning is bizarre and very wrong and could cause damage to other road users.

Here is what I am getting at: whenever we do things wrong accidentally or deliberately, we never know who is watching and might be affected by that action. Some children have turned out badly behaved because of mum and dad having a shouting match every so often at home. Charges and wards have been abused by their guardians, teachers have misled their students and some church leaders have abused some of their flock.  Some of these victims have become physically and psychologically damaged for life. For those who have been in positions of authority; especially over young ones and took advantage of them, hear what God says: “It would be better for him if a millstone were hung around his neck and he were thrown into the sea, than that he would cause one of these little ones to stumble.” Luke 17:2 New American Standard Bible

When we do things wrong the consequences could be very far reaching. Even beyond where we can ever make amends. Some people have committed suicide because they were abused by people they trusted who should have protected them. Some ladies ended up in prostitution because those who should have corrected them were busy enjoying the ill gains of whatever they brought back home. Some have been murdered by ritualists today because someone else told another to go and make money at all costs. The truck driver was hurt by the action of another,; the one who parked a helicopter on the main road.

“Woe to the world because of its stumbling blocks! For it is inevitable that stumbling blocks come; but woe to that man through whom the stumbling block comes! Matthew 18:7 New American Standard Bible There will be stumbling blocks, offences, wrong doings and so on. But we should not be the ones to champion their causes. We should steer clear of offences so as not to make others stumble. Let us reflect deeply and make certain that we are not the reason why that sister or brother stopped attending fellowship.  Do not be the boss (male or female) who insists that your subordinates must secure their jobs by having an affair with you.  Do not be the auntie or uncle at kindergarten who is fondling those children. Do not be that Director of Music who wants to sleep with that soloist before her voice will be heard. You will be answering to God.

So as much and as often as possible,  we should do what is right. Every negative action has the potential of causing harm to us as well as others around us.

Let us do our best to stay on the straight and narrow. Do good and eschew evil.

DO NOT CAUSE OTHERS TO STUMBLE.