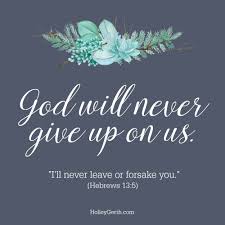 GOD NEVER GIVES UP ON US

Rima a young woman in her mid forties is married and has a young son who is a toddler. She got married as a matured single and was quite established in her career as a human resources manager at an IT firm before she met her husband. Shortly after marriage, she considered a career change. Her job was quite demanding and she knew she would be spending many hours at work if she carried on with it. Her husband was very supportive of her decision because they were trying for a baby. So he encouraged and helped her set up a business. Barely six months down the line, Rima felt she was not cut out for the buying and selling business and could not keep a shop. She found someone who was willing to buy off her stock at a discount and she stayed at home for a while trying to figure out what to do next.

She thought that perhaps the location of her former shop was not conducive. So she told her husband who agreed that they could look for a more upmarket location. Once again, Rima’s husband was supportive of the plan and backed her up financially.  As time went by, the business began to pick up, returns were looking good and Rima was able to afford an extra hand at the boutique. It was not  long after that the couple discovered that Rima was pregnant.  A few weeks into the third trimester, the doctor advised Rima to take  time off work, which she did.  Thank God all went well and she was delivered of a baby girl. She got a nanny for her daughter and her mother was around to help keep an eye on things.

After about six months Rima began to yearn to go back to work. She discussed this with her husband and they agreed that she could go in with her baby and the nanny but must be home early like most nursing mothers.  In the first week after her return to the boutique,  she observed that her sales had dropped. Oh wow! She had lost track of all that was going on at the boutique. “This does not look good” she thought. “What do I do now?  And rent is due in a few months. How did I ever lose sight of what was going on here?” After going through the books she discovered that the problem started just before she went to have her baby but she was too preoccupied to notice. It was later found out that two of the corporate  offices that staffed her biggest clients had relocated.

She decided she would not renew the tenancy and she would go back and strategize. But she could not tell her husband what was going on. So whenever he asked how things were, she just responded “fine, thank you.” Her greatest fear was that he would think her wasteful and not prudent.  She felt she had let him down considering how much time, energy and resources he had invested in the business. She was petrified of telling him that all was not well.

The story of Rima could be of anyone of us. How many times have we started something and then eventually it did not work out? It could be a business venture, a relationship, a career change, relocating to a new country, a new school,  a new neighbourhood; it could be anything. Then suddenly it is not working as we planned and we no longer want to be a part of it. Yet people supported us to get there.  What do we tell them? Some will get cross and possibly sever any ties with us. Few will be willing to help us still. “What if they mess up again?” is the question that will be at the back of their minds. Some will hound us until we are able to pay back. Some will make us the talk of the town or the butt of jokes.

Today, all I want to tell us is that there is “Someone” who is willing, over and over and over again to help us; regardless of how often or how much we messed up previous times. He will never condemn us. “So now there is no condemnation for those who belong to Christ Jesus” Romans 8:1 NLT

He will not be counting the number of times we messed up but He will be available to help us again if we find our way back to Him “God is our refuge and strength, always ready to help in times of trouble.” Psalms 46: 1 NLT

It does not matter how many times we stumble, He’s got our back. Let us just go to Him. “If they fall, they will not stay down, because the LORD will help them up.” Psalms 37: 24 Good News Translation

“For the LORD your God is a merciful God; he will not abandon you or destroy you or forget the solemn covenant he made with your ancestors”.  Deuteronomy 4: 31 NLT

The situation can never be so bad that God will leave us stranded.

HE WILL NEVER GIVE UP ON US.