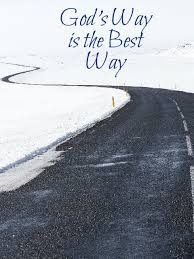 GOD’S WAY IS THE BEST WAY

It’s the Christmas holiday season and here in Lagos, Nigeria it’s all chock -a- block!  Roads are so busy and the traffic is endless. If you reside there, my advice is,“If it’s not urgent, leave it till later.” Or you might find yourself spending the better part of the day just sitting in traffic.

And so it was that a sister called me and lamented that her nanny was going away for the holidays. She had also contacted someone else who was to come in and help her out during this time.  But alas! At the the last minute this “someone else” called to cancel. Sister friend was upset, distraught and confused all at once. She began to worry about how she was going to get through the holidays. Then one of her other sister’s encouraged her to leave the matter in God’s hands and forget about the one who had disappointed, saying when things like that happened,  God usually had better plans.

And wouldn’t you just know it? She got a better bargain without even breaking a sweat.  A young man who had lived with her family about five years ago was available to spend the entire holidays with them. Not only did she not have to worry about telling him what to do, he had also been training as a chef so would be serving up some delicious dishes. I thought that was totally awesome!

On many occasions,  when things had not worked out as I had planned, I would fret endlessly and possibly even make some wrong moves and compound issues. Other times I would just be grouchy and moody. And nobody would want to be around me. When I heard what happened to my sister,  I was inspired in a different way.  Committing our plans into the hands of God’s does not mean they will turn out as we planned them. The outcome of many of our own plans could spell disaster, but for that disaster to be averted, God might have to rearrange things. When we do not see the bigger picture we get upset and even think that our prayers were not answered. Yet God is working quietly behind the scenes to protect and preserve us.

When the Israelites were being oppressed by the Philistines, and by Goliath in particular,  even the best of their high ranking officers were cowering because of the giant. Then came David, a shepherd boy with no military training or background insisting that he will get rid of Goliath.  The Commander in Chief of the Israelite army, King Saul, naturally assumed that David would do his best while kitted up in full military gear,  but not so.  God delivered the Israelites that day, from the “uncircumcised Philistine”, but David took the giant out with a sling and a stone and not any special military weapon. If perhaps David had appeared before the giant in the full military armour,  it probably would have ended in a disaster. Saul might have been unhappy when David refused to wear the armour, but at least He did not stop David. Even if you grudgingly have to abandon a well laid out plan because something suddenly went wrong, please do so. Do not keep trying the same routine again and again. It might be futile.

If you are one who always wants  to have your way no matter what, please have a rethink. God’s way is always the best way. Even our best laid plans sometimes flop and a plan that was never rehearsed could bring remarkable results.

As we approach the end of 2020, every single one of us can look back knowing the year did not go as planned at all. COVID 19 happened! For some, the pandemic opened new and better opportunities,  while for others there were losses. But no matter what the case was for you,  trust God with everything because with Him; “…we know that all things work together for good to them that love God, to them who are the called according to his purpose.” Romans 8 : 28 KJV That is not to say we should go about  without making plans or setting goals. When we have done those, commit them all to God. He knows the end from the beginning.  And if He knows the end of a particular path will lead to destruction,  He can redirect the path. Whenever that happens, please stay calm and let God have His way because His way is always the best.

Have yourself a very merry Christmas and let God lead the way into 2021.