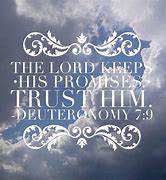 HE KEEPS HIS PROMISES.

As parents we often make promises to our children about gifts we will give them especially on birthdays and holidays like Christmas. Sometimes we want to surprise them and other times they know what it will be but either way they look forward to it with excitement. From the minute we tell them about these gifts, the burden and the responsibility to make good on the promise is entirely on us, the parents.

The bible which is the word of God is filled with promises  from our Father to us, and it is important for us to know these promises. This is one of the reasons why we must spend time in the word so that we can locate our promises. Now once we locate a promise and we tell God we have seen and heard His promise, the responsibility is on God to deliver on that promise. “That’s right,” the Lord replied, “and I always rise early to keep a promise.” Jeremiah 1:12 Contemporary English Version OR “Then the Lord said to me, “You have seen well, for I am watching over my word to perform it.” Jeremiah 1:12 New American Standard Bible

As long as the responsibility is on God to perform and keep that promise, it is entirely up to Him to do it any way He pleases. There was the story told of some people that God loved dearly. God always sent messages to them about things that would happen to them. Then one day God sent a messenger named Jerry and Jerry’s message was for a future event. (about forty seven years to come). At the time Jerry brought this message, the situation did not look like what he was telling them and many probably thought he was out of his mind. But Jerry was not intimated because he trusted the One who sent him. And the One who sent Jerry was going to make that future event happen. This is the story of God’s deliverance of the Israelites after they had been taken into Babylonian captivity. “Years ago the LORD sent Jeremiah with a message about a promise for the people of Israel. Then in the first year that Cyrus was king of Persia, the LORD kept his promise by telling Cyrus to send this official message to all parts of his kingdom:” Ezra 1:1 Contemporary English Version Our God is a promise keeper. Cyrus the King of Persia did not even acknowledge God let alone believe in Him. Yet God saw fit to use him to keep a promise. “For the sake of Jacob my servant, of Israel my chosen, I summon you by name and bestow on you a title of honor, though you do not acknowledge me.” Isaiah 45: 4 NIV And this action of the Lord should not surprise us because it is written: “The king’s heart is like a stream of water directed by the LORD; he guides it wherever he pleases.” Proverbs 21: 1 NLT

Please note the following: God’s message through Jerry was for a future event just like we as parents also promise things to our children in advance. And even if we do not keep going to them to say we are working on it our children always keep reminding us about it. Saying; “Mummy, don’t forget my birthday present!” or “Daddy, you promised!” We should always remind God about His promises too.

Jerry’s message was delivered forty-seven years prior. And God did not say “Ah, it’s now too late!” So if you are waiting on a promise, God has not forgotten. He keeps His promise.

God moved the heart of someone who did not even know God, to keep the promise He made to His people. This says that help can come from anyone, as long as God empowers them. Even from where it is least expected. Let us therefore not despise anyone that does not seem to fit into our own “perceived” idea of help. Listen to what God said “For the sake of Jacob my servant, of Israel my chosen…” Whoever God uses to help us is for our own sakes. God is concerned about keeping a promise to us and He will pull out all the stops to do just that.

The extent of power that God gave to Cyrus to go and deliver His people is mind boggling. Yet God did it because He had a promise to keep. “This is what the Lord says to his anointed, to Cyrus, whose right hand I take hold of to subdue nations before him and to strip kings of their armor, to open doors before him so that gates will not be shut: I will go before you and will level the mountains; I will break down gates of bronze and cut through bars of iron.” Isaiah 45:1-2 NIV

The same God is with us today and He has not changed. Has he spoken a word, a promise to you? Fear not, keep reminding Him just the way our children remind us of promises we make to them. God is on it. He will make it good. The words will not return to Him without accomplishing what they are sent to do.

TRUST HIM, HE IS A PROMISE KEEPER.