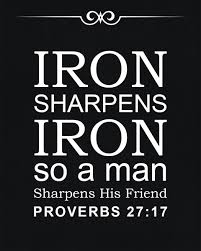 With the way the world has been this past couple of months, I have spent more time indoors than normal. Something I have particularly ruminated on is friendships and the effects they have on us. The bible says in Proverbs 27:17 International Standard Version (ISV), “Iron sharpens iron; so a man sharpens a friend’s character.”  It is a simple yet loaded verse; if you have a blunt knife which needs sharpening, you sharpen it with a knife sharpener, both of which are made of the same material. (In the context of the verse knives were made of iron, but in present times knifes are made of steel.) This verse is basically saying that things made of the same material are sharpened, enhanced, improved and honed by each other. You cannot use plastic or rubber to sharpen a knife, one will negatively affect the other. That’s exactly what the bible is saying, the way the same material sharpens the other is the same way a friend should sharpen their friend.

This cannot be overemphasised, it is very important for us to surround ourselves with people who will sharpen us, people who are like-minded and will make us better than we were initially. The kind of friends we should aim to have are the ones we can be ourselves around with no fear of judgment, people who can correct us in love and with respect. People who build us up and not tear us down. We should also aspire to be that type of friend to others as relationships are a two-way street.

Proverbs 27:7 AMPLIFIED BIBLE (AMP) “Oil and perfume make the heart glad: So does the sweetness of a friend’s counsel that comes from the heart.”  The counsel of our friends is very important to us, the warmness we feel when we smell a favourite scent is the same tender-heartedness we should feel from the words of our friends. Imagine an optimist who has very pessimistic friends, such a person may think that pessimism will not affect them. Now imagine this optimist constantly hearing their friends complain and criticise all the time gradually the optimist will start to pick up these traits. And before you know it someone who sees the good in many things, will suddenly see the negative in everything. Don’t believe me? This is perfectly encapsulated in Proverbs 22:24-25, The Message Version (MSG) “Don’t hang out with angry people; don’t keep company with hotheads. Bad temper is contagious — don’t get infected.”

Now let us look at the other angle, if an optimist surrounds themself with fellow optimists, such a person will always see the good or look at the bright side as their fellow optimist will inspire. This goes to so many other character traits beyond optimism and pessimism, simply put we should be around people who have traits we have or want to see in ourselves.

I particularly want to address younger readers on this, please understand that not everyone near you i.e. in school, department, sports club or hostel has to be your friend. Certain things about us make us unique and the fact that we may not always be near people similar to our uniqueness doesn’t mean we have to change to fit in. It is a big world and with time you will find your place in it. Also remember that no person is an island, we humans are creatures of interaction.  “Two are better than one, because they have a good return for their labour: If either of them falls down, one can help the other up. But pity anyone who falls and has no one to help them up.” Ecclesiastes 4:9-10 New International Version (NIV)

I urge us all to be open to friendships, especially in this social media age. The world is reaching an era of seemingly shallow and trivial friendships, people want friends who will look good in a selfie. There is nothing wrong with that, but when life happens or things go sour can you run to your selfie friend?

In 1 Thessalonians 5:11 AMPLIFIED BIBLE (AMP), the Apostle Paul said “Therefore encourage and comfort one another and build up one another, just as you are doing so.”

Let us be intentional about choosing our friends, their influence is stronger than we realise. Choose people who can learn from you and whom you can learn from in return, people that will lift you up and not tear you down.

Surround yourself with like-minded people.