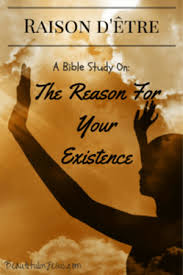 THE RAISON D’ETRE – THE REASON FOR BEING

A couple of months ago, our church orchestra treated us to some instrumentals from the soundtrack of the musical “Sound of Music.” It was both surprising and refreshing at the same time.  It brought back very fond memories of my childhood. I suddenly recalled the words of one of the songs and wondered why I had never paid attention to them. “Climb Ev’ry Mountain” is the song I am writing about.  I learnt that “Climb Ev’ry Mountain” was composed by Richard Rodgers while the lyrics were written by Oscar Hammerstein II.  It is a song that has been described as “an inspirational piece, to encourage people to take every step toward attaining their dreams.” Below are some of the lyrics:

Every path you know

‘Till you find your dream.

So have you found the dream? Are you living it yet? What do you get up for each morning? What do you really dream of doing that seems like you are never going to have a chance to do it? What are you so passionate about that you are afraid to tell others? Everybody has a purpose; a “raison d’etre” (meaning “the reason for being”) and defined by the Oxford English dictionaries as “the most important reason or purpose for someone or something’s existence.”  Are you living your purpose?

I got to find out that when you are not doing what you are “purposed” to do there is always a feeling of unease and restlessness which invariably leads to anger and sometimes frustration. We are all called to do something and I strongly believe that the moment you know what it is and pursue it you will be truly fulfilled. I know of a man who was born and adopted into a royal family. His name was Moses. “And the child grew, and she brought him unto Pharaoh’s daughter, and he became her son. And she called his name Moses: and she said, Because I drew him out of the water.” Exodus 2 : 10 KJV He never really forgot his roots and felt a sense of responsibility towards liberating his people from oppression. He became uneasy and restless because living in the palace as a prince was not his purpose. His unease led to frustration at not being able to change the situation and that led to anger which led him to commit murder. And then when he was found out, he ran for his dear life. It was on the run that God caught up with him and made known what his purpose was. And even at that, he was still terrified of going to pursue it until God sent him help and promised to be there for him. (And Aaron was the help or P.A. If you like). But Moses unfortunately never truly let go of his anger and frustration and this sadly cost him entry into the Promised land. In pursuit of your purpose are you  worried about what friends and family will say or think? We were never told  what the royal family said or thought about Moses’s fleeing the palace; I believe it was not that important.  Do not wait until you are frustrated on a daily basis and folks have to start asking you what the matter is.  Do not wait until anger takes over you. Do not wait until you become irritable at every thing.

The Oxford Living Dictionaries defines “frustration” as “The feeling of being upset or annoyed as a result of being unable to change or achieve something. Some of us are not happy doing what we do for a living. Yet we find ourselves staying there regardless. Perhaps we are “stuck” there because of the material benefits and financial gain that come with the job or simply because we are afraid to go out into the unknown of whatever it is that we are truly passionate about. Will we survive on our own? Has anyone done it before us? Were they successful at it? Will it enable us live like we are currently used to? Will it sustain the family?  And so on. Moses knew that if he did not get away from the palace and all its trappings, he would eventually be killed there. Please do not wait till you drop dead running after someone else’s dream. Like Moses run if you have to and let God reveal your purpose to you. Like the Rogers and Hammerstein song search high and low until you find your RAISON D’ETRE.