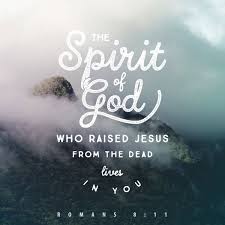 THE SPIRIT OF GOD DWELLS IN YOU!

Just how difficult can it be?

Well…Extremely so; if you are trying to do it on your own, that is!

However if you just let go and invite God to take the reins, I believe that you will do much more than you thought possible.

Let us talk about David the shepherd boy turned king of Israel for a minute here. We must know that his defeat of Goliath,  the Philistine giant was definitely not by any prowess of his. I mean, he used a sling and a stone! (I Samuel 17:50) Since when were those weapons of warfare? Yet he hit his target; bullseye! And thus an almost seven-foot military giant with years of experience as a trained warrior was defeated by a “mere” shepherd boy with no military experience whatsoever! What on earth was his strategy? Why was he so confident that he could permanently silence the boasting giant? Flash back quickly to 1 Samuel 16:13 “Then Samuel took the horn of oil and anointed David in the presence of his brothers; and the Spirit of the Lord came mightily upon David from that day forward.” 1 Samuel 16: 13 ( AMP) The Spirit of the Lord had taken over David. So he was no longer a “mere”  shepherd boy. The Spirit of God had empowered him to do something extraordinary.

How about Zerubbabel?  The opposition against him was staggering.  He had laid the foundation of the temple but building and completing it seemed almost impossible. Attacks kept coming from all directions. “Then the people of the land weakened the hands of the people of Judah, and troubled them in building, And hired counsellors against them, to frustrate their purpose, all the days of Cyrus king of Persia, even until the reign of Darius king of Persia.” Ezra 4: 4-5 KJV . Then God spoke expressly to Zerubabbel  “Then he said to me,This is the word of the Lord to Zerubbabel: Not by might, nor by power, but by my Spirit, says the Lord of hosts. Who are you, O great mountain? Before Zerubbabel you shall become a plain. And he shall bring forward the top stone amid shouts of ‘Grace, grace to it.’ The hands of Zerubbabel have laid the foundation of this house; his hands shall also complete it. Then you will know that the Lord of hosts has sent me to you.” Zechariah 4:6, 7, 9 ESV

Are you perhaps struggling with something?  Or there has been an on going battle with an issue that has plagued you for some time now? The truth is, it does not matter what it is and how long you have been fighting it. The Spirit of God will overcome what appears too hard to be defeated. Now, please know this: THE SPIRIT OF GOD THAT RAISED JESUS CHRIST FROM THE DEAD, LIVES IN YOU AND I, TO QUICKEN AND GIVE LIFE TO OUR ” MORTAL” BODIES (ROMANS 8:11) David was physically enabled by the Spirit of God in his mortal body to slay Goliath .Zerubbabel was also physically enabled by the Spirit of God in his mortal body to  finish the work of the temple. That is the same Spirit that dwells in you and I.  Print that out, stick it on your mirrors,  post it on your noticeboard, on your fridge. Wake up to it, read it before you go to bed. Let it sink into your very core. Fill your mind with that consciousness and that knowledge. Never be led to believe otherwise. It is not outside of you.  It is within you, to achieve, to acquire, to become, to conceive, to conquer, to overcome, to succeed, only  because the Spirit of God that dwells within you empowers you. And will make you excel like Daniel. (Daniel 5:12)

Be strengthened by the Spirit of God that dwells in you. Because of Him, you can do this!

PLEASE DO NOT GIVE UP!