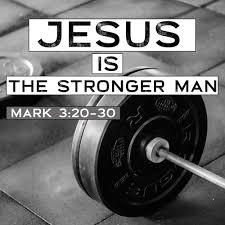 A few days ago, I had a vivid vision that went like this.

A very strong man, built like a body guard (very tall, all muscle, big biceps etc) was being held bound. His hands were being tied behind his back and his ankles were tied together. He was completely powerless.

“Shall the prey be taken from the mighty, or the lawful captive delivered? But thus saith the LORD, Even the captives of the mighty shall be taken away, and the prey of the terrible shall be delivered: for I will contend with him that contendeth with thee, and I will save thy children.”  Isaiah 49:24-25 KJV

A question had been asked by Isaiah of the Lord. And it really was a rhetorical question. Prior to this question, the Lord had been talking about the restoration of Israel and describing in detail how this would happen. So Isaiah’s question was like: “Seriously?  Can all those things you say really come to be, when these enemies are much stronger than us?” The use of the conjunction “BUT”, to introduce the Lord’s response is indicative of a response that will be in contrast to what Isaiah had asked. And also in the Lord’s response the use of the modal verbs shall and will expresses certainty about the occurrence of what is promised. Simply put when the Lord says “The captives, the victims and the preys of  the mighty shall be released, rescued and delivered”, that is exactly what will happen. The how of it is not what we should be worrying ourselves about. If He says He will do it, let us just consider it done.

Now, a lawful captive,  a prey or a victim is often taken away against their will ( even if the captor has the right- like in the case of a burglar who is caught); but also of note is that preys are being constantly hunted down by the enemy so that at the slightest false move, said enemy swoops down and takes them away. “Be sober, be vigilant; because your adversary the devil, as a roaring lion, walketh about, seeking whom he may devour:” 1 Peter 5:8 KJV In order to get the captives out of the grasp of the cruel, terrible strong man (a feat that Isaiah did not think was possible at the time; as he asked: “Is it possible to rescue victims from someone strong and cruel?” Isaiah 49:24 Contemporary English Version), his house must first be invaded. He must be tied and bound up. “But when a stronger than he shall come upon him, and overcome him, he taketh from him all his armour wherein he trusted, and divideth his spoils.” Luke 11:22 KJV

“For he broke down their prison gates of bronze; he cut apart their bars of iron.” Psalms 107: 16 NLT Every strong man holding us bound has become powerless in the presence of the One to whom all power belongs.

It does not matter what we are dealing with or struggling with today. The global pandemic, health and especially mental heath challenges, addictions of all kinds, lack, loneliness, untold hardship, even if we got ourselves into the mess accidentally or deliberately,  the Stronger One is here for us all. We must acknowledge Him as Lord and personal Saviour. Let us develop or intensify our personal relationship with Him. Let us draw closer to Him, more now, than ever before. He is all the help we need at a time such as this.

Like I saw in that vision, Jesus the Stronger One,  not only bound that strong man, and broke the gates of brass, He led me out. He wants to lead us all out of the chaos and captivity of the devil. See yourself being led out of those chains now. And as you see it you are out:  rescued, delivered, and free.

BECAUSE THE STRONGER MAN CAME TO GET US!