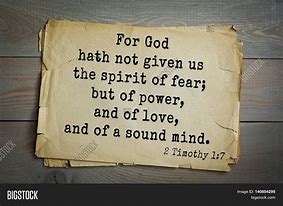 WE HAVE A SOUND MIND

“Are you out of your mind?”

“She was not in the right frame of mind.”

“He must have lost his mind.”

I read the story of a man who acted insane. He had totally lost his mind. It was so bad that he could no longer live among the living. And though he was bound hand and foot he lived in the cemetery, among the dead. He used to do terrible things to himself like cut himself up with bits of stone, yet he never realised the damage he was doing to himself. Jesus sought this man out and set him free from a condition that was sending him to an early grave. (After all was he not already living in the graveyard?)  What we saw was that this man was out of his mind when he was being self destructive. His mind had been invaded and taken over by a “legion” of demons.  The demons that occupied his mind were telling him what to do. And he did whatever they told him to do. He did it though it was harmful and destructive. But Jesus came.  “Then they went out to see what had happened, and came to Jesus, and found the man from whom the demons had departed, sitting at the feet of Jesus, clothed and in his right mind. And they were afraid.”  Luke 8: 35 New KJV It says there that he was now clothed and in his right mind and that was because Jesus had come and sent the demons packing.  I cannot help but see a connection between being taken over and being manipulated by demons and indulging in self destructive habits.

It might be that the case of the mad man from the Gadarenes seems rather extreme. But the truth is whenever we continue to indulge in self destructive habits it is some level of insanity. And we definitely need help. So for example, compulsive disorders especially eating disorders will only eventually lead one down the road to an untimely grave and yet so many of us indulge here even though the consequences are not hidden. We see that when Jesus met the mad man from the Gadarenes, his condition was immediately apparent, yet how many of us are dying slowly from habits and addictions that others do not see us indulge in but are totally destructive. How about substance abuse or addictions of any kind? Or is it skin lightening under the pretext of maintaining one’s complexion? These are damaging and destructive habits that have debilitating consequences. So are we in our right senses if we carry on this way? Let us think about it. Jesus helped and delivered that man who was out of his mind and He can do the same for us today.

It is written that “He sent out his word and healed them, and delivered them from their destruction.” Psalms 107: 20 ESV The word of God has been sent and given to us. It is quick and it is powerful. It can heal, rescue or deliver from destructive habits. We are told that the Spirit God has given us is of power, of love and of a sound mind. We must believe this and keep reaffirming it to ourselves. We must reject the oppression and manipulation of the devil because we have the mind of Christ. “For God hath not given us the spirit of fear; but of power, and of love, and of a sound mind.” 2 Timothy 1:7 KJV

What is that habit you cannot seem to break that you know has far reaching destructive consequences? Perhaps you have even begun to see it as a cross you have to bear or maybe you have just given up fighting and are looking for strategies to help you manage it.

Please do not be afraid, do not give up and do not throw in the towel. Jesus came to save us and He will. His words are spirit and life. As we speak them over ourselves healing is being activated and we are being delivered from every destructive force of the enemy. So do well to speak life by speaking the word.

Jesus loves us. He needs us in our sound mind on this side of eternity to help bring others to Him. Let us not allow the enemy to oppress us. Remember he came to steal, kill and destroy. But Jesus came that we might have abundant life.

AND HE HAS GIVEN US A SOUND MIND TO DO THIS!