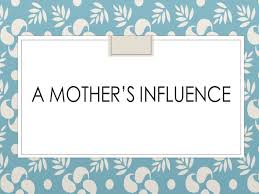 The past week has been a continuous celebration of women. And indeed it should be, for we are special like that. (Smile ):)

Women generally have been on my mind for a while. I honestly was not going to write about us again today  but I am led to do so. Everyone has influence actually and if is not just the womenfolk. Whether it’s good or bad, the influence is there. So ladies and gentlemen,  how are we doing in our spheres of influence?  I want to believe that we are doing good and holding it together.

I came across a story that made me think very deeply about what we pass on to our offspring.  A lot of women will confidently say that their mothers are their role models and heroines.  But not all women can say so. The woman in the story I mentioned above, was the mother of two kings, in her lifetime. “What an achievement!”  most would say. But sadly both kings were disgraced out of office. This woman was ‘Hamutal’ in the bible (2 Kings 23:31) the mother of king Jehoahaz and king Zedekiah. Their father was king Josiah of Judah; a ruler of whom glowing tributes were written. “He did what was pleasing in the Lord’s sight and followed the example of his ancestor David.  He did not turn away from doing what was good.” 2 Kings 22:2 NLT Yet as soon as Jehoahaz his son took over, he discontinued all the reforms that his father had instituted. What could have possibly gone wrong with this young man? He reigned for only three months and yet in that seemingly short period it was clear to all that he was no good. He ended up as a prisoner in Egypt where he eventually died. Another of his brothers was also made king of Judah shortly afterwards. He was no better than his brother before him; and his whole territory was kept under siege for eleven years of his reign. And he was eventually carried off to Babylon as an exile and tortured.   (2 Kings 24 18 – 2 Kings 25-7). Both brothers were reported to have done evil in the sight of the Lord.

I later found out that the mother’s influence over her sons was the reason why they turned out the way they did. The prophet Ezekiel had a lot to say about it. He mourned king Jehoahaz and king Zedekiah. He lamented their upbringing.  This is found in the whole of Ezekiel 19 and it is referred to as “A funeral song for Israel’s Kings.”

“A Song of Sorrow

The LORD told me to sing this song of sorrow for two princes of Israel:

What a lioness your mother was!

She reared her cubs among the fierce male lions.

She reared a cub and taught him to hunt;

he learnt to eat people.

The nations heard about him

and trapped him in a pit.

With hooks they dragged him off to Egypt.

She waited until she saw all hope was gone.

Then she reared another of her cubs,

and he grew into a fierce lion.

When he was full-grown,

he prowled with the other lions.

He too learnt to hunt and eat people.

He wrecked forts, he ruined towns.

The people of the land were terrified

every time he roared.

The nations gathered to fight him;

They spread their hunting nets

and caught him in their trap.

They put him in a cage

and took him to the king of Babylonia.

They kept him under guard,

so that his roar would never be heard again

on the hills of Israel.

planted near a stream.

Because there was plenty of water,

the vine was covered with leaves and fruit.

Its branches were strong,

and grew to be royal sceptres.

The vine grew tall enough to reach the clouds;

everyone saw how leafy and tall it was.

But angry hands pulled it up by the roots

and threw it to the ground.

The east wind dried up its fruit.

Its branches were broken off;

they dried up and were burnt.

Now it is planted in the desert,

in a dry and waterless land.

The stem of the vine caught fire;

fire burnt up its branches and fruit.

The branches will never again be strong,

will never be royal sceptres.

This is a song of sorrow; it has been sung again and again.

I pray that we will never be the reason for sorrow to others.

I pray that we will pay attention to our children and remember to train them up in the way that they should go so that when they grow up they will not depart from it.

I pray that we will not raise destructive,  abusive, rebellious and violent children.

I pray that we will never abuse the opportunities and privileges given to us as custodians of our offspring.

I pray that we will be mothers (and fathers) of good influence, not only to our children but to all our charges.