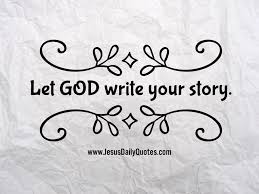 WHAT IS YOUR STORY – LET GOD WRITE IT

Everybody has a story! Most of us have passed through all kinds of things to be where we are today. And I dare say that whatever we have been through or will go through is part of God’s plan. He alone knows why He allows certain things to happen. Some good and others not good. Yet if we trust Him, He will not let us be consumed by whatever comes our way. When we find ourselves in unpleasant situations let us always remember what God tells us; “I know the plans that I have for you, declares the LORD. They are plans for peace and not disaster, plans to give you a future filled with hope.” Jeremiah 29:11 God’s Word Translation If that is what God says about His plans for us then that is exactly what it is. Therefore it is important to trust Him all the time.

Let us look, for a moment, at Samson, a judge in Israel before they had kings. He was empowered by the Spirit of God for exploits. (Judges 13:25, Judges 14:6, Judges 14:19 and Judges 15:14)  “At that time, the Philistines were in control of Israel, and the LORD wanted to stir up trouble for them. That’s why he made Samson desire that woman.” Judges  14:4 Contemporary English Version. What had happened was that Samson had expressed interest in  a Philistine woman. It was simply unimaginable that Samson would tell his parents to go and ask for her hand  (in marriage) because she was a daughter of their enemies.  What on earth was he thinking? Yet he did, because it was all part of God’s plan, so that Samson would defeat the Philistines who had been oppressing the Israelites for so long. He had to battle a lion along the way so that when it was time to face the Philistines he would be well equipped to do so.

What about David, the shepherd boy turned king?  When a sheep from the flock he was tending got attacked by a lion and a bear, he rescued his sheep and killed both animals. From that prior experience he also killed Goliath the Philistine giant that had been oppressing and terrorising the Israelites. God allowed David to be faced with an attack from two animals because of the greater challenge of facing Goliath that was to come. And when that challenge came God made him victorious.

So I ask what is your story? What are you struggling with? What is going on in your life right now that seems like the world is closing in on you? Please stay strong and hold on to God. Perhaps he is preparing you for something greater. Listen to what He is saying; “There isn’t any temptation that you have experienced which is unusual for humans. God, who faithfully keeps his promises, will not allow you to be tempted beyond your power to resist. But when you are tempted, he will also give you the ability to endure the temptation as your way of escape.” 1 Corinthians  10:13 God’s Word Translation.  The same God who has allowed this pandemic will not let it drown us. If we are still here God knows we will not break. He knows we have the power to resist depression, to not give up, to not quit. He has given us the ability to endure so we must hang in there.

Samson did not give up because of a lion. It was a great obstacle as one can imagine but he faced it and moved on. David did not leave the sheep to be devoured by the the lion and the bear.  He also faced them and moved on. We are now face to face with the COVID 19. What do we do?

This is definitely not the time to retreat or surrender. We must not give in to the temptation to do anything foolish. Some of us have lost but some have also gained in this season. You can gain too if you bring it to God. He has got our back.

And know that because we are still here He will give us a good story to tell at the end of it all.