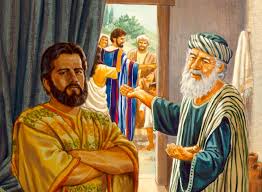 THE FATHER’S HEART TOO: EVERYTHING I HAVE IS YOURS.

The parable of the Prodigal Son is one that we often share to explain the Father’s love for us despite that fact that we may go astray. This parable tells the story of a son who asks for his portion of his father’s wealth (this is already questionable behaviour as his father is still alive!) His father gives it to his son, the son then went to a faraway land and ends up squandering all his wealth. After a while, the land went into famine and the son had nothing.  One day while working on a pig farm, and longing after what the pigs eat, he decided to go back home and beg for his father’s forgiveness even if it meant working as a servant. When he returned home, his father accepted him with open arms and even threw him a feast. The moral of the story is usually this, no matter how far we stray, God will always accept us when we ask for his forgiveness. The story however does not end there, Jesus spoke in parables and everything he said has a meaning. The Prodigal Son had an older brother, his story equally has a moral lesson, from Luke 15:25 – 32 New International Version, the story of the elder son is told.

What was wrong with the elder son you may ask? Was he not happy to have his brother back? From the parable we can see that he was too focused on his younger brothers redemption that he failed to realise what he had, he compared his blessings to that of his brother. Indeed everything their father had was his but he could not see beyond his self-righteousness. He was so focused on doing good that when it was time to reap the fruit of his labour he did n’t pay any mind to the beautiful tree that he had planted. Instead, he looked at the seedling of his younger brother with disdain. He pretty much said “Why father, I have served you all these days and you do this to me?” Luke 15 Verse 23 says the father asked for the fattened calf to be killed in order to celebrate his long lost son, while in verse 29, the elder son told his father that he never even gave him a kid (let alone a calf). But in verse 31 his father said to him “everything I have is yours”, not just a fattened calf, everything he had.

That is as far as the story goes. The actions of the elder brother amounted to self-righteousness, pride and discontentment. Why did he think he could question the fact that his Father forgave his younger brother? Sounds familiar? We know a new believer or a person who lost their way, when they turn to  the right path and God is blessing them, we ask “but God I’ve been here all this whiole”, “Oh God look at me”, “God are you just going to accept them as your child (again) after all they’ve done?” The reality is we were once there (Romans 3:23 NIV For all have sinned and fall short of the glory of God,) and tomorrow it could be us who go astray.

I have too many times, found myself in the shoes of the older brother. I may not ask God directly, but I wonder in my mind “why does this new believer have this and that. I have been here since and I don’t have this and that yet”. From a different perspective, have you been working so hard on a project hoping to get that bonus or promotion, but it was given to someone who just started a month ago. It is that same feeling, not exactly envy, but it is like “what about me?” And in your mind you wonder, I have been here all this while, I have been diligent and patient. Like the older son, you have served, you have not transgressed. We complain and complain, but God looks at us and says  “Child, all that is mine is yours” “everything I have is yours” all the blessings and promises God has in store for us is ours, we are his heirs Romans 8:17 NIV. We need not spend time focusing too much on another believers journey and forget our own.

I once wrote about Unravelling the Fathers Heart (please  click > here). The great commandments as in Matthew 22:37 (RSV) “you shall love the Lord your God with all your heart, and with all your soul, and with all your might” and in Matthew 22:39 (RSV) “you shall love your neighbour as yourself”, to me are the essence of Christianity. We know that God is love, then why don’t we want His love extended to others too. God’s grace is sufficient, it is not going to run out when two or three more people become believers, it is sufficient, it is never going to run out.

God is a just God. The lyrics to a song I like goes, ‘He is such a generous God. It doesn’t matter if you have been here forever or just started your job.” I have understood it to mean this: you may have been a Christian all your life and the next man may just have known God today. But God will reward who he rewards when he rewards. This does not make him unjust, God is a generous God and this too is the heart of the father.