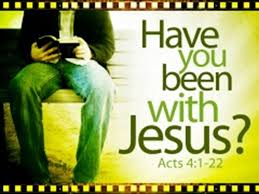 The people we spend quality time with will have a direct or indirect effect on who we are. “Do not be fooled. “Bad companions ruin good character.”   1 Corinthians 15: 33 Good News Translation  And the flip side {“Just as the company of the good saves and improves”} is the case, according to the Historian of Christianity,  Eusebius of Caesarea; so I ask who have you been with? This is a question that we might need to actually think deeply about if we have not given much thought to it before.  Every association or relationship is important, so we must cultivate relationships wisely. If they are good ones then we improve ourselves but if they are not,  we just might end up ruined.

When our Lord and Saviour, Jesus Christ, went calling His disciples, He did not go for people who had it all together. He picked them from various backgrounds and professions. But regardless of who they were or where they came from, Jesus had a close relationship with all of them and spent a lot time with them. There were times He went with them to minister to others and there were times He was alone with just them. They got to know Him intimately. Though Judas Iscariot who betrayed Jesus into the hands of the enemy and Peter who denied Him thrice were also His disciples, most of the others were positively influenced by their association with Jesus.

The most obvious character trait was boldness. “The members of the council were amazed when they saw the boldness of Peter and John, for they could see that they were ordinary men with no special training in the Scriptures. They also recognized them as men who had been with Jesus.” Acts 4: 13 NLT  The council members were shocked at the confidence displayed by so called “uneducated” men. They had learnt from the best so they were sure of what they were talking about and did not back down even when their lives were at great risk. As a matter of fact most of them were so boldly outspoken in defence of the gospel that they eventually met gruesome brutal deaths as a result.

In the past few weeks since the onslaught of the corona virus pandemic we have witnessed all kinds of reactions from all around the globe. But the level of fearfulness has been pretty alarming. I agree that being a novel corona virus even medical science is in a bit of a struggle as to how to deal with it. And so if our medical personnel have been a bit overwhelmed and are not able to give us the assurance that most people really need, I suggest we spend less time on social media which is currently awash with all kinds of fake news and conspiracy theories ( some which are deliberately fabricated to create unfounded fear and panic) and spend more time on things that edify. “Don’t let them waste their time in endless discussion of myths and spiritual pedigrees. These things only lead to meaningless speculations, which don’t help people live a life of faith in God.” 1 Timothy 1:4 NLT

As we spend time on spiritual exercises like praising, worshiping,  praying and studying the word of God, believe me, we will be empowered to face the months ahead with boldness. After all “For God did not give us a spirit of timidity or cowardice or fear, but [He has given us a spirit] of power and of love and of sound judgment and personal discipline [abilities that result in a calm, well-balanced mind and self-control].” 2 Timothy 1-7 AMPLIFIED

Before David came out boldly to defeat Goliath, he had been spending time with the Lord privately (He praised God on his harp).  He recognised that it was God who had rescued him from the lion and the bear that had come to attack the flock of sheep he had been tending. Simply put there was an existing relationship that led him to trust the Lord.

If for any reason our relationship with the Lord is on the back burner right now, it is time for a rethink. Let us stop wasting time on things we have no control over and which will end up depressing us.

Let us spend time with Jesus. If we do, it will be clear that we have been with Him when like David we face up boldly to whatever comes our way.