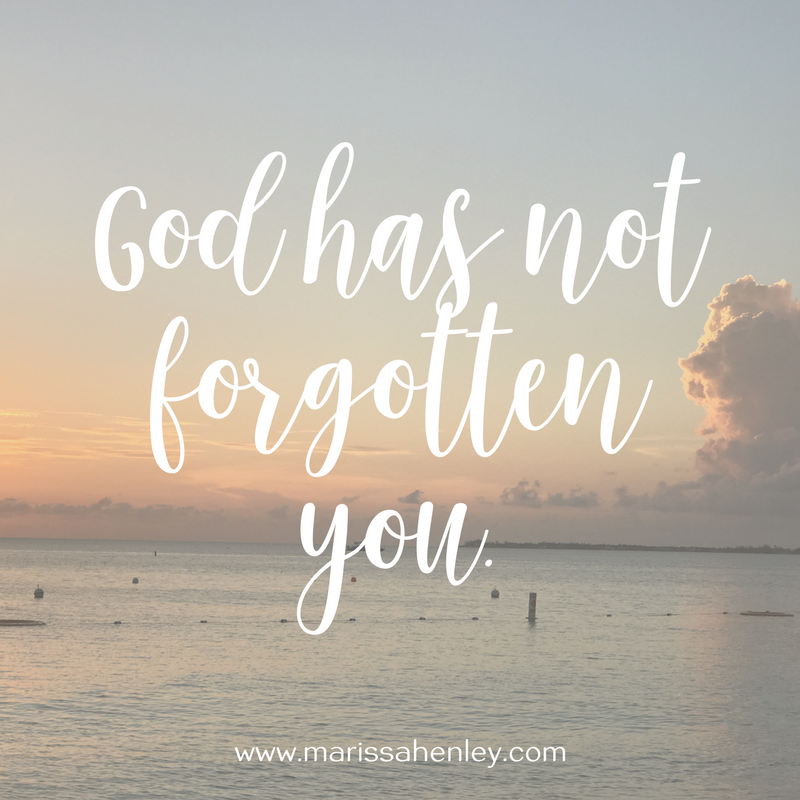 YOU ARE NOT FORGOTTEN.

This is a true story.
God forgets nobody.
Sometimes it looks so bleak
But God will still take you to the peak
His ways are not like ours
He knows which way to steer the oars
Therefore let Him lead the way
He will bring us to the perfect day.

Many years ago I heard the following story.
There was a young single lady in her mid twenties. She had older and younger siblings and they were all happy as a family with both parents. She met a young man and they began a relationship. Everyone thought it would end in marriage. Sadly, it did not. And one after the other her siblings got married and had children. She carried on with her life.

At some point she quit her job and tried  to set up her own business and started doing contracts. Initially the road was rocky and rough but eventually she pulled through and was doing well enough to pay her own bills.
As the years wore on she fell on some hard times, she lost some and then eventually all the contracts. It was one bad turn after another. It seemed like there was no end to the troubles coming her way. She sold off her cars, money was fast running out and there was no help in sight. Her siblings did what they could and her parents too but for a grown woman who by then was in her forties with her own needs, it was not enough.
One New Year’s eve,  she decided she had had enough. Just around the corner from her house was a church. She decided to take a walk down and be part of the crossover service and really pour her heart out to her Creator.
As the service ended, she slowly left the church while responding to a few greetings of “Happy New Year”, here and there. She felt lonely. Husbands were hugging and cuddling their wives and children as people began to pile themselves into their cars driving off into the night that was filled with the noise and bright display of fireworks all around.
She got to the road and saw a homeless man lying in the street. She thought to herself “Well at least that makes two of us spending New Year’s alone.” And she sighed heavily as a tear rolled down her cheek. And then she thought “Perhaps I can do something for this man, “; so she put her hands in her trouser pockets and pulled out a few bills and bending down tried to squeeze the money into the man’s hand. The next thing she knew was a stinging slap across her face as the man jumped up and hit her. She almost lost her balance but for a passerby who steadied her and admonished the homeless man. “You ought to be grateful you, now be off with yourself this minute!” And the man scurried off into the dark.
The lady thanked the passerby and ran the rest of the way home. As she opened the door, let herself in and closed the door behind her, she collapsed into a heap on the floor and sobbed herself sore.
She kept saying “Lord what exactly have I done wrong to deserve all this shame and humiliation? When will you help me and save me from this disgrace?” She kept saying in between the torrential sobbing.
She finally crawled to her bed and slept off.
A new day , a new year but for her nothing new had happened. Nothing had changed.
For her it was the last straw.
She had seen and had enough. By this time she was well advanced in years.
And just as she was about to give up, she felt led to stay out of circulation and add more value to herself.
On her way to attend some courses she met a young lady who insisted on introducing her to a man she knew who was single and searching. She declined and thought, “I have had it with men”. But the lady was so persistent and did not take No!, for an answer.
Well after about a year she hooked up with the man.
They got married in a short while and they became business partners too.
The  rest as they say, is history.

DEAR FRIEND, YOU ARE NOT FORGOTTEN.