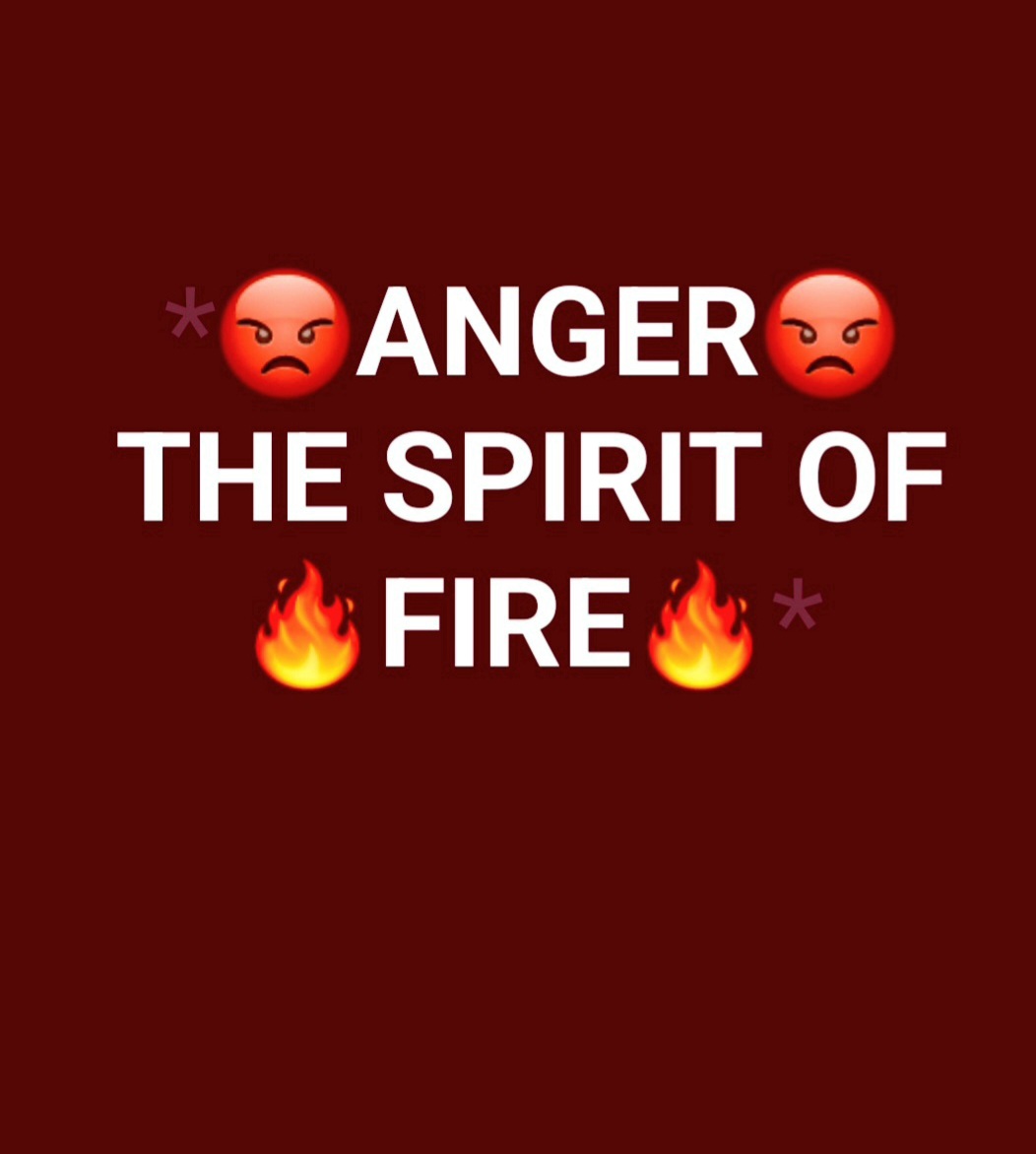 ANGER,  THE SPIRIT OF FIRE!

Last week I was angry, someone had upset me and I was livid. In the heat of that anger I took it upon myself to “go off” about how angry I was and nothing good came out of my mouth to say the least. Shortly after, my anger had subsided, I looked back at the things I said and I wished I controlled my tongue better.

I’m comparing anger to fire because I think they are very similar. Although anger is an emotion and not a physical thing, it has the tendency to keep burning and burning till it consumes everything in its way, just like fire. Acting-out while angry is never the best thing to do, we are giving power to our emotion and allowing it to guide us. Not controlling our anger also shows that we are not exercising self control. As Christians we should aim to exercise self control because it is a fruit of the spirit.

“But the fruit of the Spirit is love, joy, peace, long-suffering, kindness, goodness, faithfulness, gentleness, self-control. Against such there is no law.”

I want to briefly refer back to the piece I wrote about the Power of the Tongue. In James Chapter 3, James refers to the tongue as a restless, unruly evil which is untamable. The tongue in its natural state is already unruly, now imagine an angry tongue? Even though we may not mean to say something when we’re angry, the tongue doesn’t care.

In the Bible, Moses was a person who suffered the consequences of not controlling his anger. In Exodus 32, after Moses’s had communed with God on the Mount Sinai and when he returned to the Israelites, he saw that while he was away they had made a golden calf and worshipped it, Exodus 32:19 New King James Version says:

“So it was, as soon as he came near the camp, that he saw the calf and the dancing. So Moses’ anger became hot, and he cast the tablets out of his hands and broke them at the foot of the mountain.”

After communing with God for so long, in the heat of anger, Moses threw the tablets to the ground and they broke. Exodus 32:16 says that the tablets were of God and the writing of God. Also, in Numbers 20:7-12, God commanded Moses to bring out water from a rock for the Israelites by speaking to the rock, Moses went ahead to speak to the Israelites and strike the rock twice. He didn’t listen to God. Moses did not have control of his anger, and as a consequence he never entered the promised land he had journeyed so far and so long for. The simple lesson here is that our negative actions while we are angry have consequences, we may hurt someone (or even ourselves!) with our words and actions while we’re angry. The feeling of anger is fleeting but the burn still remains, the forest fire still smolders on.

The Bible advises us in the following verses:

“A wrathful man stirreth up strife: But he that is slow to anger appeaseth strife.” Proverbs 15:18 KJV

“Cease from anger, and forsake wrath: Fret not thyself in any wise to do evil.” Psalms 37:8 KJV‬‬‬‬‬‬

We are humans and people are bound to hurt and upset us, but we can not let anger as an emotion control us. The Bible also advises us when it comes to controlling anger in Ephesians 4: 26-27 The Message Version, it says:

“Go ahead and be angry. You do well to be angry—but don’t use your anger as fuel for revenge. And don’t stay angry. Don’t go to bed angry. Don’t give the Devil that kind of foothold in your life.” Ephesians 4:26-27 MSG

‭‭There’s nothing to be proud of in having “anger issues” or saying “my anger” is bad. Everyone gets angry, the real problem is control of that anger. As I like to say, “catch yourself” when you are angry. Some practical approaches to controlling anger is to take oneself out of that situation, try to cool off, be very mindful of what you’re saying , try not to raise your voice and pray, ask God for grace. Let us not be revengeful or violent while angry, it will be like setting a forest ablaze with a little flame, you look around and see that the fire has consumed everything in its surrounding.

Today let us ask the Holy Spirit for self control and guidance in controlling our emotions.