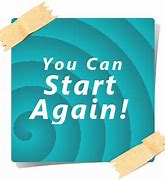 YOU CAN START OVER

Starting over again could be one of the most painful things to ever do. There are degrees to starting over. No pupil is excited about starting a class all over again after very poor grades the first time. Nobody wants to start that project or dissertation all over again when the supervisor does not look pleased with what they have submitted. No lady is quick to start another relationship after coming out of an abusive one. Men and women are not looking to pair up so easily after being jilted or cheated on. No man or woman is in a hurry to jump into another marriage after the loss of a spouse.

For the reason that nobody wants to be labelled a failure; a pupil, an undergraduate or a post graduate student will do their best to see that they do well to have better grades and succeed at their project. Yet in the case of relationships, when it comes to starting again; fear is so real. As a matter of fact many just give up and do not even bother to try again.  They are not willing to take the risk. The emotional investment for some is way too much. Others just shut down and become totally detached from the possibility of ever loving or living again. Will he or she love me like my ex or my partner? Will he be abusive too? Will she be kind and considerate? Will he be generous? Will she betray me or cheat on me? Will he let me work and pursue my career? Will he love my children? There are just so many questions that need honest answers and many things to sort out and think through that one might be willing to close the door permanently on starting over in a new relationship.

However, it seems that starting over again is not an exclusive experience to man. Even our Heavenly Father had to start again. When God created man and put him in the garden, the original plan was for there to be a perfect intimate relationship. But sadly that was not the case. Man sinned and as the world gradually degenerated God had to start again. “The Lord observed the extent of human wickedness on the earth, and he saw that everything they thought or imagined was consistently and totally evil.  So the Lord was sorry he had ever made them and put them on the earth. It broke his heart.  And the Lord said, “I will wipe this human race I have created from the face of the earth. Yes, and I will destroy every living thing—all the people, the large animals, the small animals that scurry along the ground, and even the birds of the sky. I am sorry I ever made them.” But Noah found favor with the Lord.” Genesis 6: 5-8 NLT Because Noah found favour with the Lord, he and his family were preserved in the ark which God had instructed him to build.  “Everything that breathed and lived on dry land died. God wiped out every living thing on the earth—people, livestock, small animals that scurry along the ground and the birds of the sky. All were destroyed. The only people who survived were Noah and those with him in the boat.” Genesis 7: 22-23NLT Thus, God started all over again.

As people began to make blood sacrifices to atone for their sins, the blood of rams and bulls was not enough to reconcile God to man. Then God gave up His only son to die for us on the cross and when that happened the relationship God enjoyed with Adam in the garden was restored. For God to start over it was not easy, He had to let His only son go, but He did it because of love. If God could start over with man, then I guarantee we can start over again at anything, without fear and anxiety. Once we become born again and accept Jesus Christ as our Lord and personal Saviour, it simply means God has started over with us. It is a clean slate. No more sin is imputed to us. We are completely forgiven.

“This means that anyone who belongs to Christ has become a new person. The old life is gone; a new life has begun! And all of this is a gift from God, who brought us back to himself through Christ. And God has given us this task of reconciling people to him. For God was in Christ, reconciling the world to himself, no longer counting people’s sins against them. And he gave us this wonderful message of reconciliation.” 2 Corinthians 5: 17-19 NLT

Dear friend, there is absolutely nothing to be afraid of now. If God could start over so can we. Did you fail at something? Were you hurt in a past relationship? Did you lose a partner, a spouse or a friend? Did you make a wrong decision? At some point, God regretted ever creating man but that did not stop him from starting over with Jesus.

You too can start anything over with Jesus; Do not be afraid it will be ok.