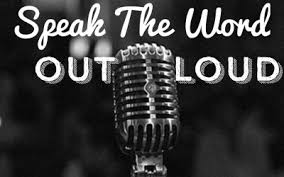 Psst!!! I just want to share with you the amazing power in proclamation.

The Oxford Dictionaries define “proclamation” as “a clear declaration of something”. To proclaim therefore is to clearly broadcast, pronounce, speak up or voice something out without any ambiguity.

Whenever I plan on setting out to do something new, it does not come without some fear and doubt on my part. But over and over again when that happens what I do is stand in front of my mirror and begin to proclaim whatever it is that I have in mind to do. And before long I do not even remember the fear or doubt. It could be referred to as “psyching oneself up” but now I know it’s the power in the proclamation. I am certain of this because when I just mull it over in my mind it does not have the same effect as when I speak it out clearly and boldly. There is just so much power in the words spoken out loud. (So please be careful what you speak out!)

When the Israelites were in battle with the Amorites and it appeared that they needed more time to win and totally defeat their enemies, Joshua spoke out and here is what happened.  “Then Joshua spoke to the Lord on the day when the Lord handed over the Amorites to the sons of Israel, and Joshua said in the sight of Israel, “Sun, stand still at Gibeon, And moon, in the Valley of Aijalon.”  Joshua 10:12 AMPLIFIED And it was recorded that the sun indeed stood still like it had never done before. “So the sun stood still in the middle of the sky and was in no hurry to go down for about a whole day.” Joshua 10: 13b AMPLIFIED

The giant of Garth had terrorised the Israelites for so long by proclaiming his supremacy over them. The words spoken out by Goliath were what the Israelites heard and which caused them to cower away in dismay and fear.  “When Saul and all Israel heard these words of the Philistine, they were dismayed and greatly afraid.” 1 Samuel 17:11 AMPLIFIED Simply put his spoken words terrified them and nobody challenged or countered those words until; Enter David!   David changed the game. He started talking big, calling Goliath an uncircumcised Philistine. David spoke out! He literally had the last “word” when he proclaimed thus:  “This day the Lord will hand you over to me, and I will strike you down and cut off your head. And I will give the corpses of the army of the Philistines this day to the birds of the sky and the wild beasts of the earth, so that all the earth may know that there is a God in Israel, and that this entire assembly may know that the Lord does not save with the sword or with the spear; for the battle is the Lord’s and He will hand you over to us.” 1 Samuel 17:46-47 AMPLIFIED I think on hearing those last words from David, Goliath must have thought angrily “how dare you!!” And probably just rushed to try and get his hands on David, but Alas! David had proclaimed deliverance for the Israelites and so deliverance was theirs.

When our Lord and Saviour, Jesus Christ, called Lazarus forth from the grave, it was definitely a proclamation.  Please note that He had prayed to His Father in heaven just before. But He still went ahead and made a proclamation by issuing a command which He spoke out clearly and boldly in fact it is written that He yelled for Lazarus to come out. And Lazarus did come forth.  “Then Jesus shouted, “Lazarus, come out!” John 11: 43 NEW LIVING TRANSLATION (I guess sometimes we have to scream at that problem or obstacle to get it out of the way!)

Let us not forget  God our Heavenly Father who proclaimed and spoke everything into being at creation. From the very beginning He said “Let there be……. and there was”.  In our article of Oct 5th. 2016; LET EVERY THING THAT HATH BREATH PRAISE THE LORD,, it was written that the use of the verb “to let” when followed by an object is to formally introduce or issue a command. And remember that when a command is issued it must be carried out. What are we then waiting for, like our Father we must begin to issue commands to see things change around us.

I hereby “announce this word” today  “LET THERE BE JOY AND PEACE”!

And trust God, there will be in Jesus name!