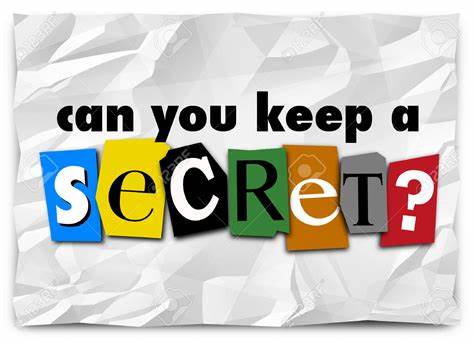 CAN YOU KEEP A SECRET?

Yoruba people from the south western part of Nigeria have a saying that goes like this; “When your yam is cooked and ready to eat, eat it secretly.” I have always found this very interesting. A few days ago, I got to know the origin of this saying. In some parts of South West Nigeria where yam is grown, yam harvest does not occur at the same time for all yam farmers. It was the case then that families ran low or ran out of food supplies from the previous harvest season before the new yam festival. However, some farmers were fortunate enough to have some of their yams sprout earlier than others. These ones would secretly cook on the farm and feed their families there on the farm and immediately proceed to bury all traces of the act. However, if other people caught wind of this act it could actually have severely damaging consequences. I was told of how angry villagers could just walk across such a farm and somehow (by some fetish means) destroy any further harvest.

This got me thinking and I began to look for instances in scripture where people were secretive. And look what I found! Joshua sent two spies ahead to view the land of Jericho. “Then Joshua son of Nun secretly sent two spies from Shittim. “Go, look over the land,” he said, “especially Jericho.” So they went and entered the house of a prostitute named Rahab and stayed there.” Joshua 2:1 NIV It was for a good reason obviously. Had they not been secretive, they would have been killed and the Israelites would probably have been too scared to go up against the walls of Jericho to enter in and possess their promised land. They got to know how afraid the people of Jericho were of them and this encouraged their boldness.

Jesus Christ our Lord, told us to give alms, fast and pray in secret. And then He went on to say we would be rewarded openly. We do not need to put everything we do in the public domain. Everything does not have to be on social media. Some things are kept private and secret for a reason and a season. When the Angel Gabriel appeared to Mary and told her she would conceive in her womb and bring forth a son, I am certain she was absolutely petrified. But we were not told that she ran out screaming. Rather she went in search of her older cousin Elizabeth whom the Angel had mentioned was also pregnant in her old age. I am sure they had a lot to share and encourage each other with as both experiences needed support. Cousin Elizabeth’s husband had been made mute (probably because he could not keep a secret) so that he would not go shouting at the roof top about his wife’s pregnancy. So there could not have been much comfort and support coming from there. Joseph on the other hand was struggling, coming to terms with Mary’s (his wife’s) pregnancy, knowing that he was not the father of this unborn child. Both women were able to comfort and support each other.

Being secretive about certain things at certain times is not being superstitious. Some things need time to grow to maturity before being exposed. Women do not conceive and have everyone peering at the foetus immediately. Even though changes to the body will reveal that conception has taken place the foetus is still secure in a womb until it grows to full term and maturity.  So maybe now is a good time to keep that great idea under wraps. Or maybe that young man that’s checking you out does need to meet every member of your extended family just yet.  Have you been asked to come for a promotion interview? Why not spend time praying about it instead of already congratulating yourself on social media. Everybody does not need to be in your business being updated moment by moment. Let it ripen and mature and then you will get the best out of it.

Learn to keep a secret.