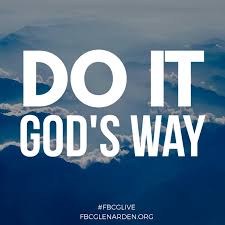 DO IT HIS WAY.

Every body has a will and we all like to have our way. The “will” is defined by the Merriam-Webster dictionaries as “a person’s choice or desire in a particular situation.” So whatever situation we find ourselves there is the option of doing our will, in other words having our own way or the option of doing the right thing because our own way is not always the same as the right way. For we are told “There is a way that seemeth right unto a man, but the end thereof are the ways of death.” Proverbs 16: 25 KJV

Very many years ago, there was a king who was supposed to be on the battle field with his contemporaries.. But for reasons best known to him alone, he made a choice to NOT go to battle and he stayed back at home. While at home he got up to so much mischief,  it was incredible!  He had an affair, he got the lady pregnant and as if that was not bad enough, he killed her husband and tried to cover up his evil deeds. Scandalous!!! But remember “there is nothing hidden under the sun.” He was exposed. That man was King David and that was what happened with Bathsheba and her husband Uriah, the Hittite. 2 Samuel 11 He left what he should have been doing and got busy having his own way. That got him into serious trouble.

In another city, centuries ago, there was a man who revered God but was surrounded by all kinds of wicked people. Their wicked acts got so bad that they did not even know they had gone too far. So the Lord decided to destroy the city and all its inhabitants and asked the man who revered Him to make an escape with his family. The man named Lot, gathered his family together; his wife and daughters. And they made to escape. But his wife in disobedience looked back and was instantly turned into a pillar of salt. That was the calamity that befell Lots wife when she decided to have her own a way.  It led her nowhere.

God is very plenteous in mercy and likes to warn his beloved children of what  dangers they could fall into when they carry on doing things that do not please Him. So He sent a prophet,  Jonah to the people, of Nineveh. But Jonah knew of God’s mercy and that God could still forgive these people he was sent to. So Jonah decided to not do the will of God and tried running away going in the opposite direction. Guess where he ended up? In the belly of a whale. But the same mercy of God that he knew of was the same mercy that rescued him from the belly of that fish and did not allow him perish there when he promised God that he would go and do His will by warning the people.

When Abraham made a choice to listen to Sarah his wife instead of to the voice of God concerning having a child, untold pain was caused all involved. Sarah became angry when Hagar conceived. (Never mind that she was the mastermind behind it) Hagar and her son were banished and Abraham was torn between his son by the bond woman and his wife. Very sadly, that pain is still being caused all over the world till this day.

Judas Iscariot betrayed our Lord and Saviour, Jesus Christ because his greed for money (thirty pieces of silver) blinded him to the will of God. He went ahead and had his way. He hung himself to his death. Which must have been very painful indeed.

It is important that we find out what God wants and then do it His way. No need cutting corners like Abraham.  It causes pain. Please do not try running away like Jonah, it is dangerous. Go where God sends you. Do not delegate or else like David you could end up in serious trouble. And disobedience like that of Lot’s wife will get you nowhere. Doing it God’s way is so important that Jesus said “.., Father, if thou be willing, remove this cup from me: nevertheless not my will, but thine, be done”. Luke 22:- 42 KJV

Jesus Christ knew the importance of doing God’s will because that is where God’s glory will be revealed. Know however that doing things God’s way is not without some pain or discomfort but ultimately the glory thereafter is worth it.

Let us then  learn to always “DO IT HIS WAY”. Trust me we will never go wrong.