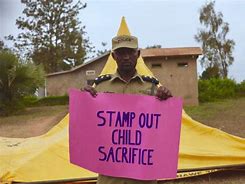 LET US STOP SACRIFICING OUR CHILDREN.

The word of God says “Lo, children are an heritage of the LORD: and the fruit of the womb is his reward.” Psalms 127:3 KJV This tells me immediately that children come from God: every single one of them. And as parents that is why we work, save and make investments believing that one day our children will inherit what we leave behind. This is why we go to lengths to write our last will and testament to be executed once we are departed from this life. Most families that have built generational wealth are able to achieve this because the inheritance that has been bequeathed from generations down has not been abused or squandered. This is why some of such families go to great lengths to train and educate their children and instilling in them very strong values, family traditions and high standards so that they can carry on the family legacy and of course the family name. All this is done so that earthly, material wealth and relevance can be preserved.

Children then should be heritages of much greater value than anything on the face of this earth and should be treated as such. But do we actually value them as such? It is not about the money we lavish on them by buying expensive toys, clothes, cars and sending them to the most expensive schools all over the world. What do we teach them? What values do we raise them to imbibe? What have they grown to appreciate? What do we expose them to? What do they see us do on a regular basis? Where have we been taking them to? The bible has this to say: “Train up a child in the way he should go: and when he is old, he will not depart from it.” Proverbs 22: 6 KJV

In the Old Testament, there were all kinds of detestable practices going on among the nations surrounding Israel and that was why God never wanted them to mix with those nations by marriage or other alliances. One of such practices was sacrificing children to their gods.  You worship your idols with great passion beneath the oaks and under every green tree. You sacrifice your children down in the valleys, among the jagged rocks in the cliffs. Isaiah 57:5 NLT Such a physical practice would be considered extreme and barbaric today (though sadly it is still happening all over the world) but some practices or habits that we expose our children to these days are just as bad as sacrificing them on altars. So for example the Big Brother reality show currently being hosted in Nigeria, in my own opinion is of no edification or moral value whatsoever and yet we have no problem with subscribing to it and watching it – with or without our children. Now, this is not a popular opinion, (but then I am not in a popularity contest). How about the kinds of parties that we host where we allow all manner of decadent practices and we allow our children to be a part of them? What about the movies we watch, the language we use (all manner of profanity), the lyrics from some of the music we listen to, the dance moves and even the clothes we wear? Some of our children have literally derailed and we wonder what happened yet we sowed these seeds. All in the name of being savvy or enlightened. The world out there is bad enough let us do well to protect them and preserve the heritage that our Heavenly Father has given us.

Thank God for His steadfast love that never ceases and for His mercy that is new every morning. He can change the worst situation around. It is not too late to get on the straight and narrow. It is not too late to stop detestable practices. God is merciful. Even if we got off on the wrong foot it is not too late to make amends, God will come to rescue us but we must cry to Him for help. “But now this is what the LORD says: “Do not weep any longer, for I will reward you,” says the LORD. “Your children will come back to you from the distant land of the enemy. There is hope for your future,” says the LORD. “Your children will come again to their own land.” Jeremiah 31:16 – 17 NLT

THESE CHILDREN ARE GODS HERITAGE.

LET US PRESERVE THEM.

LET US STOP SACRIFICING THEM ON THE ALTARS OF THE WORLD.