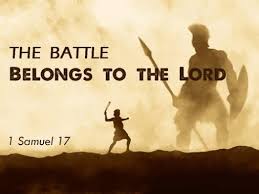 WHEN THE BATTLE IS FIERCE

These are really unusual times. We are being hit by the reality of the coronavirus pandemic. A  lot of families have had their bread winners out of work since the end of March 2020 and many businesses have been adversely affected by the lock down. Some families have lost loved ones and a lot of middle to high income earners have been supporting many families since the outbreak of COVID 19. Yet in spite of all these, here in Nigeria the pump price of premium motor spirit as well as prices of food items are on the increase. Electricity tariffs have also been increased, never mind the fact that half the time we are generating our own power. It has been quite tough out there. It is as though one is on the battlefield. And indeed it is a battle of sorts because it seems like every where one turns another shot is being fired to pull one down.

But we are not going down! That is not going to happen to us in Jesus name. I come to encourage us today, that we will see the end of this terrible situation. In the meantime let us not be overcome with anxiety. Let us trust God and believe that better days are ahead. So why are we certain that we will make it through this battle and be victorious? This is why! “He said, “Listen, all you people of Judah and Jerusalem! Listen, King Jehoshaphat! This is what the LORD says: Do not be afraid! Don’t be discouraged by this mighty army, for the battle is not yours, but God’s.” 2 Chronicles 20:15 NLT Exactly!  The battle is the Lord’s.

We must look up to God now, not to any man or woman.  There was a man who got hit at the battle front. Rather than call out to God for help at that critical time he called out to a fellow soldier. “The fighting grew very fierce around Saul, and the Philistine archers caught up with him and wounded him severely. Saul groaned to his armor bearer, “Take your sword and kill me before these pagan Philistines come to run me through and taunt and torture me.” But his armor bearer was afraid and would not do it. So Saul took his own sword and fell on it.” 1 Samuel 31:3-4 NLT  What a tragic end indeed! The arm of flesh will fail but the Lord is “Mighty to save.”

When Sennacherib, king of Assyria threatened to destroy the people of Judah and Jerusalem, the people were sore afraid but; “Then King Hezekiah and the prophet Isaiah son of Amoz cried out in prayer to God in heaven. And the LORD sent an angel who destroyed the Assyrian army with all its commanders and officers. So Sennacherib was forced to return home in disgrace to his own land. And when he entered the temple of his god, some of his own sons killed him there with a sword. “ 2 Chronicles 32:20-21 NLT. That is the God we serve. He will disgrace those who contend with his children. But you  must call on Him first.

Kings are not the only ones who reserve the right to call on God when the enemy surrounds them. At a time when some of the descendants of Israel were in a battle against their neighbours this is what they did: “They cried out to God during the battle, and he answered their prayer because they trusted in him. So the Hagrites and all their allies were defeated.” 1 Chronicles 5:20 NLT It does not matter how many things are rearing up their heads against us right now, God can sort them all out if we trust Him enough to call out to Him in prayer.

David was a young shepherd when he went to deliver supplies to his brothers at the battle front when he heard Goliath terrorising the Israelites. As he volunteered to go forward he rejected the armour that was given to him. He went with what he knew and trusted God to protect him. “And all this assembly shall know that the LORD saveth not with sword and spear: for the battle is the LORD’s, and he will give you into our hands.” 1 Samuel  17:2 KJV David trusted God even when he was face to face with Goliath. What are we faced with that’s bringing fear? Trust God and call out to Him. Because of His Mercy we will not be consumed by any of these situations.

Victory is sure at the end of every battle but it depends on whose side you are on. As for me and my family “WE ARE ON THE LORD’S SIDE.” Being on the Lord’s side simply means we are calm in the face of any threats because: “But you, O Lord,  are a shield around me; you are my glory, the one who holds my head high. I cried out to the Lord,  and he answered me from his holy mountain. I lay down and slept , yet I woke up in safety, for the Lord was watching over me.  I am not afraid of ten thousand enemies who surround me on every side. Victory comes from you, O Lord.  May you bless your people.” Psalms 3: 3-6,8 NLT

EVEN WHEN THE BATTLE IS FIERCE, GOD IS THERE TO DELIVER!  CALL ON HIM.