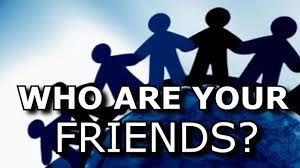 WHO ARE YOUR FRIENDS?

A couple of weeks ago,  I heard the  very sad news of a lady in her late forties who died of cancer. As sad and distressing as the news was, sadder still were the circumstances in which she was found a few weeks before her death. This lady had left home for the “big city“; years ago in pursuit of “a better life.” I have no idea what the situation was with her family but it appeared that nobody knew where she was or what she was doing. Her father died at some point and she went back home to the village to attend the funeral. She returned to her “station” which nobody knew exactly where that was. One of her cousins got her number and reached out to her, asked how she was and pleaded with her to visit home sometime as she still had an aged mother. All she said was ok. But she never let on that she had been diagnosed with cancer or that she was even in the very terminal stages. About two weeks to the time she eventually passed on, someone called her sister and identified herself as a neighbour. She related how this lady was in very bad shape and suggested they come and take her home. On getting there her relatives could not believe what they saw.  She was a shadow of herself.  On getting to the teaching hospital nearby, it was discovered that doctors were on strike. All hope was lost. She was taken home and she died in less than two weeks. May her soul rest in peace.

What could possibly have gone wrong here; that no one, no siblings , relatives,  school mates, friends, nobody knew what was going on with this lady. Who was the neighbour? So many questions left unanswered. This is very disturbing.  How many people are living like this today?  Even people who we think are close to us, even family members, and we know absolutely nothing of what they are really going through.

There was a man in the bible who was paralysed. Jesus was in his area and four of his friends rallied round, put him on a mat and carried him all the way to where Jesus was teaching. There was a large crowd and they could not get in so they went onto the roof top and found a way to lower their friend down into the room where Jesus was seated. “When Jesus saw how much faith they had, he said to the man, “My friend, your sins are forgiven.” Luke 5:20 Contemporary English Version  It was the faith of these four friends that moved Jesus.  What kind of friend was that paralysed man that not one, but four of his friends literally broke the roof to get help for him. And what kind of friends were these men who risked so much to help him? Are you and I this kind of friend or relative?

There is the story about Job and his friends. When Job was going through one affliction after another what kind of counsel did they give him? Even Job knew they were of no help to him. Hear what he said to them: “I have heard many things like these; you are miserable comforters, all of you!” Job 16:2 NIV God was angry with and disappointed in them too. “The Lord said to Eliphaz: What my servant Job has said about me is true, but I am angry with you and your two friends for not telling the truth.” Job 42:7 Contemporary English Version

Friendship is not a competition.  It requires commitment, hard work and sacrifice. Are we willing to do any of these?  It’s not about showing up at family functions and trying to outdo each other, not about hanging out together at events, comparing achievements,  milestones, wardrobes, cars, our children’s spouses, schools and grades. It is so much more than all that. Some of us are even secretly happy to know that things are taking a turn for the worse for some of our friends. Some of us are constantly scheming ways to outshine them. Did they just do something, then we want to do the same thing in a bigger way. And the truth is some are slowly dying inside but do not trust anyone enough to say what they are going through. As it is with friends so it is with family members even. Sibling rivalry is on another level now where every sibling wants to be the star of the family not caring what their brother or sister is going through. Who are our friends and what kind of friend are you and I?   Are we supportive in every sense of the word?  Some just need someone to talk to. Nothing more. Are we carrying our friends and family by lifting them in the place of prayer? What kind of counsel do we give them? Or are we always critical 🤔

“The sweet smell of incense can make you feel good, but true friendship is better still.”  Proverbs 27: 9 Contemporary English Version

LET US BE THE KIND OF FRIEND WE WANT TO HAVE! BE A TRUE FRIEND!