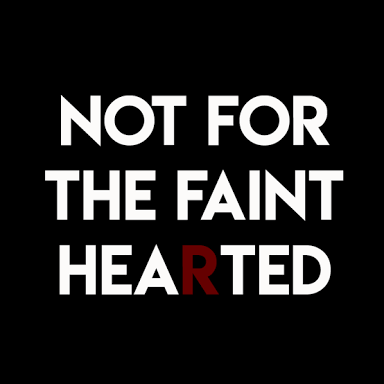 NOT FOR  THE FAINT HEARTED

There is an English phrase “Not for the faint hearted”;  which means  “something is an extreme or very unusual example of its kind and is not suitable for people who like only safe and familiar things.” Some miracles that were recorded in the Bible happened because some people did unusual things. They took bold steps. They were daring. They were not thinking of what people would say. They probably did not even see people around them anyway. Their focus was on the Lord. They had eyes for only Him.  They left their comfort zone of familiar, safe things and dared to be extreme in their trust or belief.

David was not faint hearted. He came up boldly against the Philistine giant Goliath never minding that Goliath had years of experience as a warrior. He on the other hand was a shepherd boy and had no professional experience in warfare. But he had experienced the hand of God in other encounters. “David said moreover, The LORD that delivered me out of the paw of the lion, and out of the paw of the bear, he will deliver me out of the hand of this Philistine. And Saul said unto David, Go, and the LORD be with thee.”  1 Samuel  17:37 KJV  And so his faith in the Lord was totally unwavering. He was very angry that a “pagan Philistine” would defy the armies of the living God unchallenged. David was determined to see the end of him that day. And he did. The miracle of killing Goliath was all the more remarkable because David used unusual weapons of a stone and a sling to slay the giant. Totally unconventional. Totally bold.

There is the story of some men who carried their paralysed friend  to be healed by Jesus.  At the venue was such a large crowd that it was impossible to get in through the door let alone get to Jesus. “So they went up to the roof and took off some tiles. Then they lowered the sick man on his mat down into the crowd, right in front of Jesus.” Luke 5: 19 NLT Now that was definitely daring and most unusual if you ask me and “….immediately, as everyone watched, the man jumped up, picked up his mat, and went home praising God.” Luke 5: 25 NLT Their boldness proved that they had great faith and Jesus rewarded it with forgiveness of sins which brought total healing. “Seeing their faith, Jesus said to the man, “Young man, your sins are forgiven.” Luke 5: 20 NLT

Another case was told of a woman who had suffered uncontrollable bleeding for twelve years. She had spent all her money going from one doctor to another and no one seemed able to alleviate her suffering or heal her disease. She had become desperate. Then she heard of Jesus and that He was coming to town. In those days, this woman was considered unclean and was treated as an outcast. More so anything or anyone she came in touch with was immediately regarded as unclean.  Well after twelve years of being treated so badly by family and friends, she was not going to let this opportunity pass her by. So she shunned  society and age old tradition, mingled with the crowd, (not caring that she was brushing against or bumping into “clean” folk) until she got to Jesus and touched the hem of his garment.

“She had heard about Jesus, so she came up behind him through the crowd and touched his robe. For she thought to herself, “If I can just touch his robe, I will be healed.” Immediately the bleeding stopped, and she could feel in her body that she had been healed of her terrible condition.” Mark 5: 27 – 29 NLT  “And he said to her, “Daughter, your faith has made you well. Go in peace. Your suffering is over.”  Mark 5 :34 NLT

David, the paralytic’s friends and the woman with the issue of blood, were all desperate enough to go to extreme lengths. They were fearless. They came with great faith. Therein lies the ability to do exploits. Now is the time to pull yourself up by your boot straps and GO FOR IT!!! It is within your reach. KILL THE FEAR and silence the voices that say you cannot do it.

GO GET YOUR MIRACLE. DO NOT BE FAINT OF HEART.