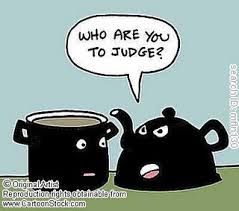 THERE ARE NO SUPER CHRISTIANS 2 : JUDGING OTHERS

I first wrote on the topic of Super Christians on www.theplaceofpraise.com on 26th May,2020. When I was inspired to write on it, I had a different idea in mind compared to the final draft that actualised. I was very happy with the feedback I received and this time around I want to elaborate on another aspect of this topic which is “judging others.”

Judging others – it is something we do so effortlessly, I would even say it takes more effort not to judge than it does to judge. Judging does not even have to be negative. It could be as simple as seeing a person’s appearance and thinking “they must be a positive influence to society” and then seeing another person’s appearance and thinking “they must be a bad influence.” We can easily come to these conclusions without even hearing what such a person has to say, because judging is something we learn from a young age.

Most Christians, would normally use a person’s outer appearance to make subjective opinions on whether such a person is “good” or “bad” , whether they are a “Super Christian or not”. I often hear things like “that person looks or acts holier than Thou.” I still wonder if they know how God looks to come to such a conclusion. But the thing is this very God looks into the hearts of people and not just at  their outward appearance and actions. But what does this mean?

1 Samuel 16:7 The Message “But God told Samuel, Look’s aren’t everything. Don’t be impressed with looks and stature. I have already eliminated him. God judge’s persons differently than humans do. Men and women look at the face; God looks into the heart.”

It’s simple, God is not focused only on the looks and appearances of men and women, he looks beyond all that and into our hearts. A person may do something which to men appears to please God, but in truth they are not doing it with their heart and vice versa.

When Jesus was choosing disciples, he chose a tax collector named Matthew. In those days a tax collector was a person who collected revenue or unpaid taxes, seeing a tax collector was not always good news. Matthew (the tax collector) in particular was not liked because he was collecting taxes for the oppressive Roman government. But Jesus called him as his follower.  The Pharisees even went ahead to question why Jesus would entertain people such as tax collectors (Matthew 9:10-11).

For a long time people (including Christians) have always expected followers of Jesus to be perfect, but that’s not the case. Jesus came for everyone, especially sinners, he said it himself in Matthew 9:12 -13 (English Standard Version) “‘those who are well have no need of a physician, but those who are sick. Go and learn what this means: I desire mercy, and not sacrifice,’ for I came not to call the righteous, but sinners.”

There is no stereotypical way a Christian should look or act, it is disappointing to see many of us so preoccupied with whether or not a person is “Christian enough”, this has never even been for us to decide. Every Christian has their personal relationship with God, we should focus more on loving and uplifting each other in Christ. The fact that a person chooses to restrain from something does not imply that they are a Super Christian. The same goes for a person who chooses to engage in something, it does not give us a right to condemn them. A person fitting or not fitting into our subjective box of what a Christian looks like does not make them more or less of a Christian. Our faith in God is not a competition, neither is it a race nor a place to show off as a Super Christian.

1 John 4: 7 – 8 (The Message), “My beloved friends, let us continue to love each other since love comes from God. Everyone who loves is born of God and experiences a relationship with God.”