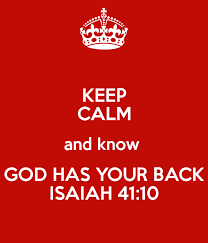 WHEN GOD HAS YOUR BACK

God always has our back but often times we let fear confuse us and convince us otherwise. The Merriam-Webster dictionaries define “Fear”  as “an unpleasant often strong emotion caused by anticipation or awareness of danger”. Sometimes we are consumed by the fear of not knowing what that new job or career change will bring, fear of not knowing if the terrain we are relocating to will be favourable to us and our business, fear that we might lose money in that investment, fear of not knowing if that relationship will work out, fear of letting our children go off to boarding school, fear of flying, fear of being ridiculed, fear of getting old,(a story for another day) …. the list of fears is endless.

When we are faced with fear I believe God expects us to look to Him for help and strength to move on. But in reality what do we do? How do we react when we find ourselves in a place of fear? Do we stay put or move ahead regardless, do we just shut down or do we talk ourselves out of taking the next step forward? Clearly we all respond to situations differently and responses to the emotion of fear are varied. For some the fear killed them and yet for others, believe it or not the fear propelled them forward.

When twelve spies were asked to go and survey the land of Canaan, only two came back excited at the possibilities therein, trusting that God could help them get there. The other ten were so afraid that they gave such a terrifying report which made others afraid. And hear what happened to them: “You will not enter and occupy the land I swore to give you. The only exceptions will be Caleb son of Jephunneh and Joshua son of Nun.” Numbers 14:30 NLT  Caleb and Joshua were the two men who trusted God in spite of what they had seen. The others allowed their fear to literally kill them.

There was this young man who seemed to be in fear and in doubt of everything. Yet God saw him as a “mighty hero”. His name was Gideon. When God asked him to go and burn the detestable idols of his father’s house,  here is what he did; “Then Gideon took ten men of his servants and did just as the Lord had told him; but because he was too afraid of his father’s household (relatives) and the men of the city to do it during daylight, he did it at night.” Judges 6: 27 AMP In spite of his fear he still trusted God and did as he was told. He knew God had his back. Eventually God used him to deliver Israel from the Midianites. He did not let the fear hold him bound.

Another group of Israelites after being held captive for many years by the Babylonians,  had plans to rebuild the temple of the Lord in Jerusalem (as the Lord had stirred the hearts of their leaders) and they had been empowered by Cyrus, the Persian king, (whose spirit the Lord God had also stirred to do this). But they were surrounded by hostile, intimidating and unfriendly neighbours. Yes they were actually afraid of these people who might have questioned what they were about but that “Fear” did not stop them. Regardless of the fear, they built an altar and started sacrificing burnt offerings to the Lord. “Even though the people were afraid of the local residents, they rebuilt the altar at its old site. Then they began to sacrifice burnt offerings on the altar to the Lord each morning and evening.” Ezra 3:3 NLT They knew the God of their fathers and did not allow the fear to hold them back. They rebuilt the temple in the face of all kinds of opposition. God sent them help. “Do not disturb the construction of the Temple of God. Let it be rebuilt on its original site, and do not hinder the governor of Judah and the elders of the Jews in their work. Moreover, I hereby decree that you are to help these elders of the Jews as they rebuild this Temple of God. You must pay the full construction costs, without delay, from my taxes collected in the province west of the Euphrates River so that the work will not be interrupted. Ezra 6: 7-8 NLT

I believe that the emotion of fear is not a new thing to most of us. Even God knew that we would feel fear sometimes and through out scripture He reassures us thus “Fear thou not; for I am with thee: be not dismayed; for I am thy God: I will strenghten thee; yea I will help thee; yea I will uphold thee with the right hand of my righteousness” Isaiah 41:10 KJV I encourage us to seek and cry out to God when ever we feel afraid. It does not matter the root of the fear. “I sought the LORD, and he heard me, and delivered me from all my fears.” Psalms  34:4 KJV

DO NOT BE INTIMIDATED! GOD HAS YOUR BACK!!